A Love To Kill Review 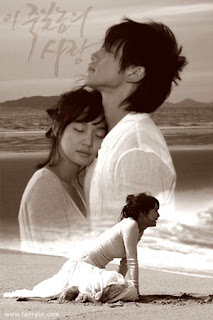 Title: A Love To Kill

Cha Eun Seok (Shin Min Ah) is a rising superstar with a sad past and dominant family. She had fallen in love with Kang Min Goo (Kim Young Jae) a poor mechanic, who one day suddenly disappeared. After she gets drunk one night and son of a chairman Kim Joon Sung (Lee Ki Woo) tries to help her, a misunderstanding occurs and the two are filmed and gone viral. In order to save her image and his reputation, Joon Sung announces that they are getting engaged, even though Eun Seok refuses, her family pressures her to.
Kang Bok Goo (Rain) a poor kick-boxer, and also Min Goo’s younger brother, lives together with his trainer and his mother in a small house. Also livening there is Han Da Jung (Kim Sa Rang) his “girlfriend” who once before in order to save Bok Goo threw herself in front of a burning log - leaving her scarred with burns. Feeling guilty and responsible, he has sworn to take care of her. After not seeing his brother for 10 years because of a fall out, they finally meet again, only for Bok Goo to see his brother jump from a building, and end in an vegetable state.
Looking through Min Goo’s things, Bok Goo realizes that Min Goo and Eun Seok had a past together, which infuriates him thinking his brother would try killing himself for a ‘bitch’. Seeing that she is living as if nothing is wrong, he decides to take revenge on her - if she can’t be with her brother, she is going to be like him - so he becomes her bodyguard. The two spend time together, and the two slowly fall in love with each other…

The beginning was good, but somehow it just became bad and long, not to mention the bad ending. I have to admit that I liked Rain and Shin Min Ah, but the drama is just too heavy for my taste. Too many things at once, too much crying, too much sworn vengeance... Too much of everything, just not enough love. It’s funny because I like the writer (Sorry I Love You, Thank You, Nice Guy), but then again, heavy dramas with shitty ends. Okay… I don’t know whether or not I recommend it, but it has Rain in it, one of his good dramas (not a fan of Fugitive honestly), but still heavy.