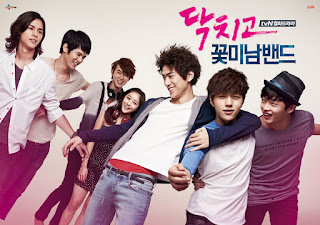 The 6 friends and member of a boy band group, Eye Candy, have to transfer into the prestigious Jungsang High School, which they arent exactly happy for. In their school they are known as the group nobody should mess with because they wont hesitate kicking your ass. When Byung Hee, the leader of the group, finds out his muse, a girl he has fallen for, goes to the school he decides that they should transfer anyway. However it doesnt go as easy as they might have thought. At the school they meet their rival, another band called Strawberry Fields. Now it all starts, the fight for their friendship and passion for playing music.

Writing review for this drama is so extremely hard because I really dont want to ruin anything for you guys!.
This drama is my kind of drama. Period. Lol.. It's got it all I love, the delinquents, the fights, the friendship and all !At first I really didnt know whether to love or hate this drama. I seriously cried after the first two episodes and didnt want to watch anymore. But I couldnt not watch it. The characters are great, the story is great, I even loved the ending! I really couldnt figure out a happy ending because it was all so sad but I loved it. One weird thing is that it somehow felt like a low-budget drama(technically). I dont know why, it just seemed that way, maybe its just me, lets see what Bunji thinks. It wasnt too long either, it reminded me of japanese drama a bit, maybe because the episodes were same length. Anyway I cant write more without spoiling. I extremely major recommend this one if you like delinquent dramas :D

Bunji's Verdict
This could have been an amazing drama, but of course they had to add a stuffy romance in it. I’m seriously annoyed with these love stories, like since when do kids think so deeply about stuff, omg… Maybe that’s why they chose such that way, but really I’m sick of these stupid “have to” separations. Even though I get WHY they split, I don’t get WHY had to announce it… Eish, and continuously those 2 boys loving one girl, stuffy!

Anyways, this is heartbreaking, heck GROUNDBREAKING actually, except for that typical romance part. I honestly believe it could have been more amazing if it wasn’t such a big part of the drama, just added a bit more, relations either with family or the guys, anything could have beaten it. Of course they should be romance, I’m not saying otherwise, but too much man, just too much…
Still my rating is focused on the overall drama, and that cool ending, any other ending would’ve just been too… Hollywood…