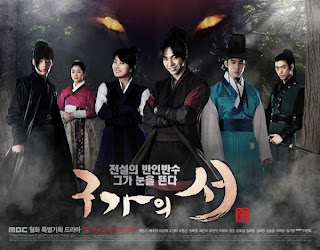 In the deep forest there are some mythical devine creatures that protect and take care of nature. They have special powers such as making nature bloom, but if they are treathened they might turn into a dangerous animal, a beast. To the people these creatures are known as monsters or gumihos. This is the story of the creature Wol Ryung (Choi Jin Hyuk) who falls in love with Yoon Seo Hwa (Lee Yeon Hee & Yoon Se Ah) and decides to turn into a human, a process which takes 100 days. 20 years later, it is the story of Kang Chi (Lee Seung Gi) now half beast half human, the son of Seo Hwa and Wol Ryung. Kang Chi has been taken in by the a great nobleman and raised as human, but will soon have to face his true self, and even experience being an outcast.

What is really nice about the drama is the continues presense of Wol Ryung and Seo Hwa, otherwise it would have just been a repeat of history, quite boring. I really liked that couple and that they appeared again, and not just stayed as the couple that failed in the past. For a fantasy drama I think it did really fine. It touches the story of mystical creatures in the fores which is quite famous in asia, mainly china and korea. But it is not quite about Gumiho's which could be a bit confusing. The people in the drama call the beast a gumiho but it isn't the story of gumiho.. The actors did a great job, I did see some awkward acting from Sung Joon.. But overall it was good. In my opinion Suzy did well as well, also the character fits her good. Seungi did good althought I just couldnt see him as a 20 year old. Anyhow, nice drama, it was very alright but not the one you burn for watching. But close to it. I recommend it, a nice historical drama.

To start of I don’t think there is a drama like this one out there, in the positive way. But the storyline is seriously typical. You know the entire ‘monster-wanting-to-be-human-falls-in-love-with-a-human-who-loves-him-for-whatever-he-is” kind of drama. Though the beginning was fresh, even sad, and the drama continued in the same tragedy kind of feel, I was a bit annoyed by the general story of ‘history’ being repeated. Even though I can say I was excited at the ending by the thought there might be a season 2, I remembered how the first season started, and how they would just continue to repeat the story.
I love Lee Seung Gi and his characters, also the way he is portraying them, which is always a treat. Though this is my third time seeing Suzy in a different role, I can’t seem to enjoy her acting. She seriously needs a better character to portray. Generally the entire cast was good, so not much to say there.
Now, should you watch it? I think it is a good story about the Gumiho’s and a decent love story, so yeah go ahead!