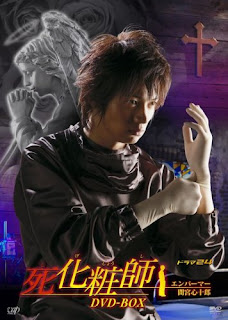 “Embalming. It is the art in which the corpse is preserved from decay and sterilized, in order to restore it to its state before death.” (Taken from intro of every episode)
Mamiya Shinjiro (Wada Masato) is a happy-go-fella working as a janitor at a hospital. Aside from his happy façade he has a secret; he’s an embalmer. He works with death and corpses at night, but at day he helps people understand death. Natsui Azuki (Shinohara Mai) works at the same hospital as a nurse. She has always wanted to help other people, that’s also the reason for her interests in the mysterious embalmer, who only comes at night and helps people overcome tragedies such as losing a loved one. Little does she know that the only man she hates the most, referred as ‘cockroach’ by her, happens to be that mysterious embalmer.

Honestly, besides the bad acting and silly screenplay, this drama is pretty cute. I already guessed the ending so I wasn’t that touched, but it’s okay. I honestly don’t really see the bad in embalming, except it being occasionally useless. Okay, yes, this drama is ALL about WHY embalming is helping people overcome the loss of the dead ones, but seriously I would rather say it makes it harder to let go. Or that’s what I would have believed, if I were in the same situation…
Anyhow, I used I think about 3 years to watch this.. Long time, but it’s fun. One of those typical Japanese dramas, that makes you well relax. Lol, of course its hell of a sad, but still pretty good.