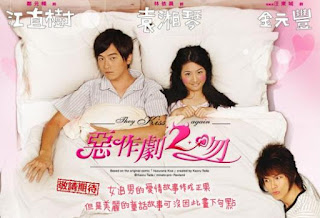 The sequel of ‘It started with a kiss’, where the story begins after the wedding of Jiang Zhi Shu (Joe Cheng) and Yuan Xiang Qin (Ariel Lin) and they are on their way to their honeymoon. Xiang Qin hopes for romance, but their honeymoon is interrupted by a couple, who just can’t seem to leave them alone. Even after that harmony doesn’t last long; not alone is Zhi Shu busy with school and Xiang Qin simply can’t find anything, other than being the wife of Zhi Shu, to do with her life, for some reason Zhi Shu doesn’t want to register them as a married couple in the family register, which makes Xiang Qin wonder if he hasn’t regretted marrying her.

I gotta admit, I really liked the second season. Actually way more than the first one, though to say I’m not a “It started with a kiss / Itazura Na Kiss”- fan. I remember watching the Japanese ISWAK some years back and I remember thinking that the story was so silly and pretty dull.
‘They Kiss Again’ is different, mainly because the opportunities to part are very slim in this one since they are married. So it becomes a story about a newly wedded couple, their difficulties and struggles.
This ‘season’ is for ALL ISWAK lovers, even if you only liked a little bit of the first season, you’ll definitively want to watch this one. I mean it’s what everybody wants, when they watch a drama, and it ends with them getting married, and then you go: “what’s gonna happen next” but the screen says THE END. And if you missed kissing scenes in ISWAK they surely make up for it in TKA.
The script seems a little looser this time, or is it that the actors are so amazing that the dialogues seem to be written at that EXACT moment, because it doesn’t seem staged, most of it.
About the starcast, like there aren’t MANY actors, there are gazillion: Joe Cheng, Ariel Lin, Jiro Wang, Danson Tang, Cai Yi Zhen, Aaron Yan, Wang Zi (never imagend to write Aaron Yan and Wang Zi in the same sentence), Larisa to name a few.
Okay, Ill come down from my pedestal and admit that Joe Cheng is a good actor (OMG! Never thought I’d write that!), usually I hate his acting, and to be honest his face, but seriously, he’s brilliant when it comes to sad scenes. I get sad when he’s sad!
There was one thing I didn’t like, the fact that there wasn’t a main story, like in the fist one.
ANYHOW, I’ll give this drama this rating, with a smile on my face :D

I really liked this review.. i dont know why. i havent seen the drama yet.. and i dont like the female main actor.. therefor i have no intention to watch it. but i kind... hmm felt your feelings while reading this.. seriously. its good :p

Lol, really? Do u believe that this drama gave me such a nice feeling that I had a good time writing this review ;)