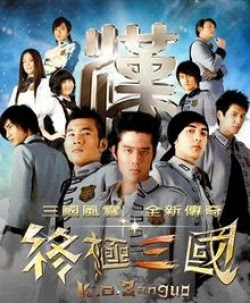 After being thrown out of their 24th school, due to fighting, Guan Yu (George Hu) and Zhang Fei (Lin Bo Yan) meet Liu Bei (Chen De Xiu), who promises to help them enroll in his school, a school for royal people. Both Guan Yu and Zhang Fei believe him, even decide to become sworn brothers with him, unaware of Liu Bei's intentions of taking over the world.
At the same time Xiu (also played by Chen De Xiu), Wang Da Dong (Jiro Wang), Wang Ye Se (Calvin Chen) and Ding Xiao Yu (Aaron Yan) from the Gold dimension visit the Silver dimension, the current dimension, going through several dimensions since the three got their powers back. Xiu warns his friends not to do anything that change the flow of the dimension, which they unfortunately do, and a huge rock hits Liu Bei, just as he is to become sworn brother with Guan Yu and Zhang Fei. With a righteous mind, Guan Yu wants to end his life, because he believes his sworn brother is dead, but gets knocked out by Zhang Fei. The four from the Gold dimension come to aid and decide to let Xiu take Liu Bei's place in the Silver dimension, until Liu Bei gets better. But the Silver dimension is different than the Gold dimension, and the body switch secret has to be kept hidden, which makes everything much more difficult...

To be honest, and now I’m REALLY honest, this is a pretty fun drama. Yes, the comedy is tacky, the fighting unrealistic and not to mention the silly screen-play sometimes, but seriously, the best K.O drama of them all…I love the ‘main’ actor Chen De Xiu, actually fell in love with him because of this drama, though I’ve seen him in The X-Family. And the female character played by Pets Cheng is soo adorable, makes a sweet couple with De Xiu. Other couples are brilliant too, George Hu and Kirsten Ren are good too, even though occasionally awkward from Kirsten Ren’s side (newbie acting), and the cutes/silliest couple with gave me a lot of ’awwww’ and ’Hahanah!’Huang Niu (Zhou Yu) and Cai Yi Zhen (Xiao Qiao).
This drama is for people who want a decent drama, a bit of the silly side to it and not to mention the goofy side as well…