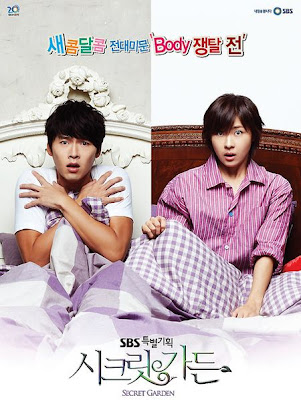 Kim Joo Won (Hyun Bin) is arrogant, rich and the president of Loel. One day as he is to get an actress he mistakes the stunt woman, Gil Ra Im (Ha Ji Won) for her. As he does not ask whether it is her but just asks "Do you know Oska?" she answers yes because Oska is a musician and her idol. She follows him and he does not find out that he has made a mistake till later. But BAM! love at first kick. He cannot stop thinking about her and often visits her and tries to get to know her. But Gil Ra Im is very different from him. She has had a hard life because she lost her mother at early age and her father, a firefighter, some years back. She lives in a small cheap place with her friend. Joo Won himself is surprised that he has fallen for his woman because she has nothing which a rich family would look for in a daughter-in-law and that is also the reason why they meet a lot of obstacles. But one of the biggest challenges they meet is when they mysteriously switch bodies, now they even have to try living each others lives but will their love pass the test? Will they grow closer or will it break their love? Their love faces one challenge after another ...

The drama made me go "KYA!" . Yup. Its a kya-drama. One that makes your heart beat faster and has a lot of those kiyooo couple moments. Even though the only thing that ruined the realistic-feel was when they switched bodies, that makes you go "oh well,, its just fiction". But it was still one of the reeally good romance comedies. It had lots of humor all the time it was fun and you laugh a lot. But then it also had those heartbreaking moments where you kyaaant breathe, and those sweet lovey dovey moments that make you heartbeat skip. Another good thing is that an issue or problem never stays too long there is always something new happening and so it keeps your interest and doesnt get boring. But one thing i wondered was like.. are korean dramas all on low budget? There are so many technical ..things. And like where the director should yell "NG!!" but nope. And the editing is not quite good as well. And yeah im psyco when it comes to tht. It has to have really good quality or it ruins my experience. But this is not the only drama. But it still means a lot when it comes to rating stars. Short: the visuals are bad. But the feel is definitely high because i rate it a Kya-drama. Thats high. Cause at the end i couldnt say anything i just went "gyaah.." . The kyaah at the end of a drama says it all , :P

Bunji's Verdict
Without doubt one of the most amazing storylines in ages, and I’m surprised to say I actually liked it. Even though it has those ‘drainy’ moments, it’s one of those that warm your heart, episode after episode.
On the other hand, I have to agree with Jenny, it SERIOUSLY has the worst editing; either that or the director was on crack. I mean even I noticed so many freaking mistakes. Lol, like at the ending of one episode it’s night, next episode, same scene, its morning. May not be noticed if you are watching it with 7 days in between, but watching them one after another is horrible.
The script was good, so were the characters, but towards the ending it became a little too much, like complicated and confusing. The ending was nice though, closes a lot of question or ‘loose threads’. I have to admit Hyun Bin is amazing, not that good-looking, actually silly-looking, but bloody hell, amazing actor.
I enjoyed it, and I guess I recommend it : D