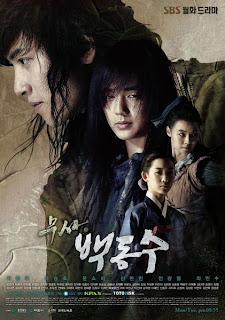 Warrior Baek Dong Soo , a real-life legend in Joseon Dynasty during King Jeongjo's reign. Around the King many traitors do whatever they can to get to power and wealth.
A little baby boy is born, Baek Dong Soo, the son of a great man who risked his life for the Crown Prince. Baek Dong Soo lost both his parents and was raised by his father's friends, all men dedicating their lives to protecting the Kingdom. Baek Dong Soo grows to an young man and we follow him as he is experiencing a lot of different things and learning martial arts along with his very good friends Yeo Un and Cho Rip so that they can serve the King. Yeo Un is also the son of one of Dong Soo's father's friends and they develop a close friendship however Yeo Un is having a really hard time as the Sky Lord, an assassin, uses him by making him believe that his fate is to be an assassin. Friendship, brotherhood and loyalty is what this drama is all about.

Writing a review is not an easy thing because we follow Baek Dong Soo through 25 years or so.. But that is what makes you so immersed in the drama, you follow the characters for so long and get a really good understanding of everything that happens. I really really liked this drama, when I started it I didnt think I would finish it that fast (29 episodes is not an easy thing for me !) but it went really fast and I have never cried this bad while watching a drama! Its not because it was like one of those really sad melodramas but because of the friendships and how those people were willing to give their everything and didnt think twice to sacrifice themselves for a greater cause. What was a bit new for me in drama was that we follow the same people for 25 years or so, it worked really well for this drama and if it was another story I dont think it would work out, but here it did and it only made it better. If you like historical dramas and dramas about friends and loyalty I definitely recommend this drama 100 % , I was crying so badly through the last few episodes but I am not gonna say more because Ill end up spoiling everything. BUT, i was gonna give 5 stars as well but im gonna give 4.5 just because the technical-director or whatever he is called could do a better job. The fighting scenes are good for a korean drama, really, but still, it could be better!

Hmm… It took me over 2 years to finish this drama, and it is the only drama I have left from that time – which I started and hadn’t finished. It was quite a long way to get by, and I am proud of my accomplishment.
That said, I am more than disappointed. Well, not so disappointed that I would say I hated it, but more that I really can’t find much in this drama which would make me recommend it, anytime, anywhere or at all. I’ll just say the good thing first: the two dudes and the girl (and her life/story): Great acting and good interpretations of the characters. Besides that I really felt I spent 29 hours of pure jawing and wrong storytelling. Just saying: don’t ruin history by making something as ridiculous as a group of assassins. Eish, I don’t understand why Oh Man Suk would agree on such a badly written storyline – at least try to keep the facts straight. And I don’t get why these assassins were as political as well. Also there was a lot of sitting around and thinking a lot – I wonder if the really did that then.
As said before, a lot of ‘meditating’ and a lot of talking – I am usually a fan of talking, but this was just a way to keep the story going I guess, but it felt very repetitive.
The love story was just plainly put bad, though they tried to fix that with a bromance – and it works, for the first 12 episodes; because they don’t really have much screen time together later on. The lead actress (the one who loves Dong Soo but is one sided) has a great backstory and I enjoyed her character the most, but when they make a dumb ending it kind of just disappears in the horizon.
I am sad to say I believe I was way too late to watch this, as it isn’t a classic, it’s a momentary drama which only works while hyped (meaning not everyone – like me – will enjoy it). But yeah not all bad.
Okay summing up: an action period drama with (very bad and few) links to the historic part of Crown Prince Sado’s death – and the legend (who by the way lived around the time of King Jeongjo not Sado) Baek Dong Soo. But if you are a fan of those boys you might like it more than I do. (I like them, but they will never affect my rating)