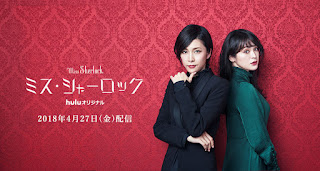 This is a Japanese version on the classic story of Sherlock Holmes.
After spending time in war-stricken Syria, the empathetic and likeable doctor Tachibana Wato (Kanjiya Shihori) returns home, only to witness the death of her mentor. This leads to her meeting Sherlock (Takeuchi Yuko), a “consultant” to the police. Arrogant, unapologetic and with bad social skills, Sherlock is a master in deduction, and runs her own detective agency - but occasionally helps the police out in cases deemed ‘bizarre’ or ‘weird’.
At first these two completely different people dislike each other, but due to her apartment burning down, Tachibana moves into the same house as Sherlock. And slowly the two begin to form a partnership…

Being a fan of the original works, I had to watch this thing. Not only is the leads female, they actually are FEMALE! Lol! I love how natural and perfect they were for their characters, especially Wato (Watson). I know the main lead is Sherlock, but she was kind of like the “typical Sherlock” you would see. I love how human Wato was, but then again Watson is the one character I like more in the original story as well… Anyways.. The drama is well acted, the screenplay well executed, and storyline is also good. Though I felt the ending was a bit rushed, but that might be because there is so much happening, but oh well.
To sum up: a good drama and an interesting watch.