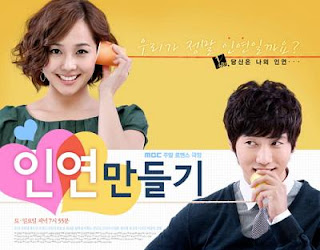 After loosing his wife Han Kyung Tae (Kang Nam Gil) leaves Korea, emigrating to Australia, with his two daughters Han Sang Eun (Eugene) and Han Hyo Eun (Kang Byul), and father-in-law Yoon Suk Joo (Im Hyun Sik). One day, 20 years later, his oldest daughter, Sang Eun, comes home with an American boyfriend telling her father and grandfather that she wants to marry him. Her father disapproves, and decides, behind Sang Eun’s back, to call a childhood-friend Kim Taek Soo (Choi Sang Hoon ), whom he has in Korea, to set up an engagement for his daughter and Kim Tae Soo’s son, Kim Yeo Joon (Ki Tae Young). He sends Sang Eun to Korean, saying that if she stays there one year he will agree to the wedding with her American boyfriend. Nor seeing any other options, Sang Eun, unwillingly, meets Yeo Jun, who is the ultimate bachelor and doctor that doesn’t date women, saying he has no interests in them. The both bump heads, and refuse to date each other, even though his family, his mother, his father Kim Tae Soo, his grandmother, his uncle and his sister Kim Yoo Hee(Kim Jung Nan), who has a 7 year old daughter, try their best to make them coupled.
Tired of their families involvement, Sang Eun and Yeo Jun, form a alience to pretend to date, in order to shut them up, much to Kang Se Won’s (Ryu Sang Wook ),( a former classmate of Sang Eun, and brother to Kang Hae Sung(Byun Woo Min ), former flame of Yoo Hee and father of her daughter, who left them (unknowing he had a daughter) because of his fathers dissaprovel) who has fallen in love with her. But he isn’t the only one against it; Shim Hyo Rim (Lee Sung Min), the stepsister of Jung Kyu Han (Jung Suk Won), best friend of Yeo Jun, is in love with Yeo Jun, and tries her best to make her leave..

Honestly, after waiting for so long and wishing for so long, the drama of my imagination came. I usually like to make my own dramas, and make stories about them, and this drama is the first one that reminds me of, one of my made up ones. Yeah, it’s typical and completely Korean, but it has so many different stories muddled up, and mixed together that you completely don’t notice that you are in a different story. I liked that the focus shifted from the main couple to the sister of the main actor and her love story, and that the supporting actors, male and female, didn’t have a shot at breaking them up. Though I got annoyed at the “I’m an elder, that’s why I’m allowed to decide your life” kind of annoyed me, a lot. Ill never fit in the Korean society.. :S
But to be honest, I REALLY enjoyed it, even though it had 31 episodes, every episode was good. Thumps up!