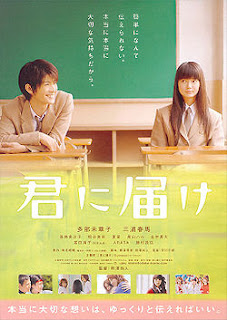 Kuronuma Sawako (Tabe Mikako) has been misunderstood her whole life; because she is shy and talks very slow, and ever since The Ring movie, she has been called ’Sadako’ (the ring girl). People avoid her, mean rumours arise around her, but Sawako is right the opposite. She is nice, friendly and thinks of others before herself. When she one day, the first day of high school, meets Kazehaya Shota (Miura Haruma), she is for the first time treated normally. Kazehaya becomes Mr. Popular, and Sawako’s admiration, but for some reason his way of acting towards Sawako is very different than with other people, which changes everything in Sawako’s life.

It’s good, the story, the actors and the characters, I just wish there would be more, I don’t know, skin ship? Lol, okay that sounded weird, but it felt kind of awkward, most of the scenes, and the ending was off, honestly, really abrupt. But that may have something to do with the manga not being done yet, so… If they made it as a drama, it would’ve been better :P
On the other hand, Haruma is more than PERFECT for this role, and I want Sawako to be my friend, like the nicest, most innocent person in the world. And this movie was one of the very few which gave me those goosebumps in the beginning, making me anxious to watch it. Oh well, you should watch it, it’s good! : )