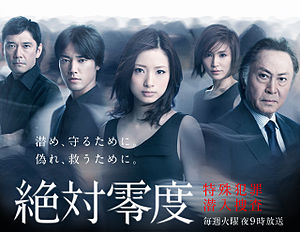 After the death of Tsukamoto Keigo (Miyasako Hiroyuki) in the SP, the team gets split up, and the most of the members get transferred into a special unit, the undercover team. Sakuragi Izumi (Ueto Aya) has issues fitting in, since she is so slow at learning how to lie and to fake identities also the death on Tsukamoto is bugging her, but her real problem is her partner: Takigawa Shinjiro (Kiritami Kenta) who is a genius in undercover operations, and is very strict. He is to teach her everything he knows in the three months he has left in the unit…

This drama is a lot like the typical Japanese police dramas, and yet not; it’s a lot more action-packed and pretty nerve-wracking. Now, I’ve watched a lot of police dramas, mainly with the CSI and Cold Cases (like the first season of Zettai Reido), but this is my first time to watch something about undercover agents (and that also covers all the American series I’ve watched). And to be honest, I was shocked! Didn’t know that all those things they do are legal.. lol..
The lead characters make a superb team; I wish they had given them some more screentime together; it’s very limited in my opinion.
On the other hand, it’s simply just a Japanese police drama, no problems between the officers, no love story and no serious issues expect for one…