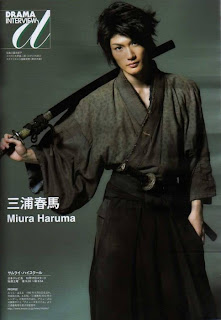 Titel: Samurai High School
Genre: Comedy
Episodes: 9
Broadcast period: 2009-Oct-17 to 2009-Dec-12
Theme song: "Kodoku no taiyou" by Monobright
Cast: Miura Haruma, Shirota Yu, Anne, Kobayashi Ryoko, Sakurada Dori, Yanagishita Tomo, Ichikawa Mikako, Matsuda Saki, Muro Tsuyoshi, Kobayashi Masahiro, Kaneda Akio, Muroi Shigeru and so on.
The drama is about Mochizuki Kotaro (Miura Haruma), a senior high schooler. One day he is recommended an ancient book about a heroic samurai from the Sengoku period 400 years ago. Kotaro notices that he has the same name and age as the samurai described in the book. And since then, everytime Kotaro is in some sort of danger, he gets possessed by the spirit of the samurai and can only return to his real self when he gets near girls.

Kotaro is a guy you can't take seriously and he doesnt has any goal in his life. He isn't good at school and is a coward. But he is a moodmaker and cares alot about friendship. The samurai is quite the opposite of Kotaro. He is all about moral, strenght ethics.
But still both Kotaro and the samurai learn about the battles of the world from each other.

While watching the drama I was so fascinated by Miura Haruma's acting. He is acting both Kotaro and the samurai. And those are to very different personalities. To be able to work like that is really amazing. It is a great plus that his acting is so reliable. He is the perfect actor for this role. It truly showed his potentials. And because of the drama I think that samurais aren't just cool, they are awesome! While watching the drama, you'll laugh so many times because of the small, but funny details.


This drama is a must if you like comedy, Japanese history and ofcourse Miura Haruma.

Bunji's verdict
The drama was fun and had a interesting plot. Miura Haruma as the lead made the drama superb, and extremely funny (I love his facial expressions). From his first role that Ive watched (14 sai no Haha) to Samurai High School, I really see and feel the change, simply outstanding. Shirota Yuu was also amazing to watch, since I only remember him as hardcore fighter Shinjo from Rookies. His akwardness and shyness surprised me, and Id go" why doesnt he fight back?" then Ill remember its not the same drama(hah, atashi no baka :P). The female cast were a little dull, didnt give me anything memorable, and they really didnt do any impact in the drama (if you ask me). All in all, fun and sometimes little ridiculus, but definetly a good passtime drama :P