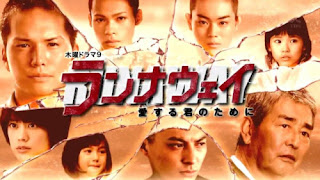 AKA:  Aisuru Kimi no Tame ni

After being imprisoned for murder of a cop Katsuragi Ataru (Ichihara Hayato) is sentenced to 6 years with hard labor. Having served 5 years, he looks forward to being released in only a year, to be with his now 5 year old daughter and girlfriend. But things change after he finds out that his daughter is diagnosed with heart failure, and unless she gets an expensive heart surgery she will die in three months. Ataru decides to break out to save her, and in order to do so he needs help, this is where Takimoto Kuuya (Ueda Tatsuya) and Kagami Shun (Suda Masaki) come in the picture. Kuuya was falsly charged for someone else’s drug crime, and Shun was unaware of the drugs he delivered: both were innocent and sentenced to 4 and 6 years with hard labor. While planning the outbreak, they are noticed by Kawashima Ryunosuke (Tsukamoto Takashi) a man sentenced for 10 years with hard for murder, which he actually didn’t commit, and he joins the group. The 4 manage to break out, but now the real problem arises, how to make sure they don’t get caught…

This drama is brilliant, amazing and incredibly touching. Being only 9 episodes it is perfectly used, and honestly enough or else you would die of all these feels. While watching this I remembered how much I love Ichihara Hayato, but I can’t point out why. There just is something about him, and the way he acts that touches you deeply. The drama is well written, well executed and also well directed, though I wasn’t that surprised by the climax, I didn’t mind it. I really recommend it, and the reason for not giving it 5/5 is that there were some scenes that were just a bit, well unbelievable.. anyways, recommendable!