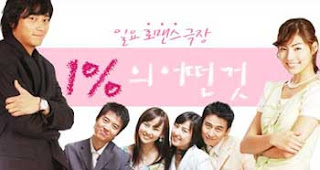 Kim Da Hyun (Kim Jung Hwa) is a bit of a blockhead; she’s smart but forgets things easily. One day she meets an old man on a train, whom she helps and befriends. Little does she know: that old man is the chairman of the Saga Company, one of Koreas biggest, and has now found a liking in Da Hyun. The chairman decides to retire and write his will in which states that if his grandson Lee Jae In (Kang Dong Won) marries Da Hyun, he’ll get the company, if he doesn’t want to, his second grandson Min Tae Ha (Lee Byung Wook) just has to marry her and he’ll get the company. Jae In and Tae Ha have been rivals and enemies their entire life, so Jae In refuses to let Tae Ha have shot.
Jae In takes his friend Kim Hyeong Jun (Kim Seung Min), who is a lawyer, with him to meet the teacher, Da Hyun, but with the fiery temper of Jae Ins, sparks fly between them and they bicker. Second time they meet they come up with a plan: make a contract where Da Hyun is to date Jae In for 10 months and Jae In is to help a student of Da Hyuns, into a school in the U.S.

This drama is interesting: it’s old without being out-dated, but has a lot of silly elements. I guess it’s because it’s an old KOREAN (notice the enlarged word), it becomes, well unnatural, but somehow, it manages to swing to my likening. It’s simple, predictable and not to mention ongoing: three love stories, all with the ’parents-disagree’ problem… A little too much, huh?
On the other hand, it’s fun, and worth ones time, well mine. Don’t watch it if you look for excitement or heart pounding, none of that here. It’s a nice family drama.