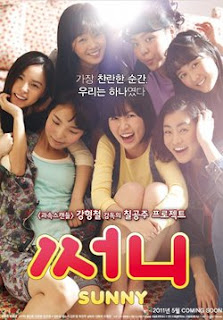 Im Na Mi (Yoo Ho Jeong) is a housewife with not much to live for except being a wife and mother. Her housebound is a busy man and her daughter doesn’t care about her, so when they leave home, she has nothing else to do besides house work. One day she goes to visit her sick mother in the hospital, she passes by a room where a patient screams and throws stuff at the nurses and doctors. She glances at the name, and is shocked to recognize it, but doesn’t really think much of it. The next day, she visits her mother again, only to be drawn to the room again, where she is greeted by her old friend Ha Choon Hwa (Jin Hee Kyung) who is dying of cancer. Choon Hwa asks her to gather their old group, Sunny, so that she can see them one last time before she dies.
This search brings Na Mi down memory lane, when she is reminded of the time when she came from Jeolla Do, as a country bumpkin, to Seoul. She is reminded of the dreams and hopes Sunny had, and also what has happened to her friends of 25 years ago…

This is a real chick flick, Korean style yeah, but still chick flick. Lol, don’t get me wrong, it’s a good movie. Very moving, funny, sweet, and not to mention relatable. But one thing I was sure of when watching this, I sooooooooo do not want to be a house wife, well not like her anyway. Like the dullest life ever, not just dull, but that isn’t a life. I love how this drama moves from past to present and how the characters haven’t changed over the years. Though, if you ask me, everything just passed by quickly. Maybe because it’s a movie, but like it was fast pased, made me want to watch it more.. Also some of the things were done halfheartedly, like her crush, the quite one of the group leaving, and the split up.
Anyways, recommendable!

Jenji's verdict
At first I found the movie weird, like what is this movie about?.. lol,. I've considered watching it a few times before but thought it looked boring and old. But it was fun, like really girl friend movie hahah, it was fun watching middle aged almost, if not, boring women and then seeing them when they were young and watch them recall the memories and trying to find themselves again as they used to be once. It was a really funny movie but turned out to be sad T_T but still really good. A great friendship movie and i was really shocked by the ending,. Enjoyable and recommendable! DEF.!