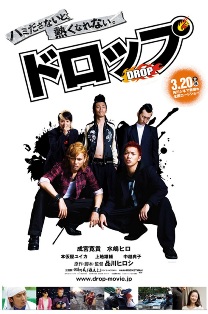 Shinaogawa Hiroshi (Narimiya Hiroki), being inspired by a Be-Bop High School manga, drops out of private school, and joins a public school to be become a delinquent. What happens is that he meets the “school thug”, Iguchi Tatsuya (Mizushime Hiro) who LOVES to fight and deals with every single problem by fighting. The two get into a fight and become friends, where the “not-so-fond-of-fighting” Hiroshi joins the gang, which includes members: Lupine, a thief who rarely fights but knows how, WanKou, an airhead who likes to fight even bites them during fights, and Moriki (Namioka Kazuki), a fast fighter that thinks before he acts.
The one supporting Hiroshi, and helps him stay grounded, is his sister’s, Shinaogawa Yuka (Nakagoshi Noriko) boyfriend, Kimura Hideo (Kamiji Yusuke), an ex-delinquent who has become a decent person.

Short and simple, I liked it. It’s a real yankee (delinquent) movie, for people who like humour, tough love, friendship and not to mention fighting (scenes). Though I was (to put it nicely) annoyed at Iguchi’s girlfriend, like I have no clue what the hell her character is doing there. I mean, no way in hell Iguchi liked her, or I don’t know, maybe he did, but noticed the fact that Hiroshi liked her, so he wanted to ‘give’ her to him, or whatever, but no less, useless. This movie reminds mostly of CROWS ZERO, but its way more humour based. Last words: I recommend it.

Jenji's Verdict
Exactly my cup of tea! :P I especially liked Hiroshi's comments.. So much fun. And it was weird watching Mizushime Hiro with this kind of role, because he was always speaking with a deep and dark voice. And all he was ever thinking about was the next fight. And they kept fighting and fighting even though they lose almost everytime, and somehow more and more people join their little gang. And what i also liked a lot was how it changed from comedy to a really serious movie at the end. Anyway great movie, been waiting for one of these to watch for a long time and its really just awesome.