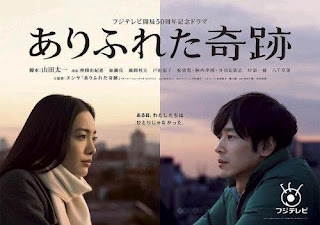 One day Nakashiro Kana (Nakama Yukie) gets off her usual train, and sees a man, Jinnai Takanori (Fujimoto Makoto) standing close to the railway. She gets a strange feeling, but turns away since the man is just standing. Walking down the stairs she passes by Tasaki Shota (Kase Ryo), who notices her turning back, and feels awkward as she can’t seem to make up her mind, weather she wants to stand on the platform or go downstairs. As a train approaches, Jinnai Takanori turns to jump in front of it, but is held back and saved by both Shota and Kana. The two of them get involved and start to find out, how they both knew about his attempt, which didn’t seem like an actual suicide attempt..

So I’m sitting here, unsure of what the meaning of this drama is, and still have no clue. As the drama started the beginning was pretty interesting, though it started lagging towards the ending of the first episode, but then, as the last 5 minutes were about to run out, I became stunned – like for the first time I had no clue that something like this was coming. That made me watch it further, and surprisingly, it didn’t really come together for me. Okay, yeah, I’m picky, but to make a drama with no real reason or meaning, and not to mention the awkward conversations. Gosh, the guy that made the dialogues should go back to school... Well, it’s not a dreadful drama, only, well, useless.