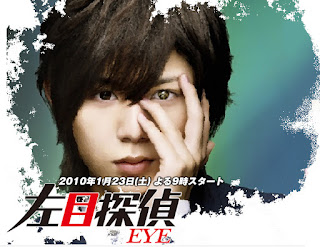 After undergoing a cornea transplant of the left eye, which he got from his brother, and after the sudden death of his brother, Tanaka Ainosuke (Yamada Ryosuke) starts to see strange images, in his left eye when he falls or hits his head. The images make him think that his brother, Tanaka Yumehito (Yokohama Yu), was in some way involved in the crimes he sees. After finding out that his brother is still alive and the master mind behind the criminal acts, he swears to be the one bringing him down.
3 monthes pass and the older brother is back with a crueler way of dealing with things, and Ainosuke is keen on stopping him and getting his brother back to being his nice and gentle older brother he knew. The teacher, Sayama Hitomi (Ishihara Satomi) is in deep debt, so hoping she could get reward money from the police by helping Ainosuke, she tries to hit him, so he can get the images. But this time, she is more involved than she expects..

Ahhh, I really missed these kind of dramas! The "supernatural-crime-solver"! Lols, no seriously it was fun, though I thought there were alot of hitting scenes. Poor Ryosuke.. Oh yeah, and crying scenes! Damn, he cried in all eps! Gosh, but his acting was amazing.. Like, every scene was realistic, not.. well "cool-with-a-feel".. Lol, I mean like Kamenashi does.. I mean, cries and tries to look cool. Ryosuke cries, but ends up looking pathetic, and cool at the same time. I cant explain, but his senpai can learn something from his kouhei.
The drama is fun, in a non hilarious way, and sad in a "ooh-poor-guy" kind of way. Though I thought the sensei was unnessasary, rather have a classmate, he falls for, than a teacher.. Feels wrong.. Getting mixed vibes :P lols..
To round up, a superb watch.. Not THE greates, but worth it :)