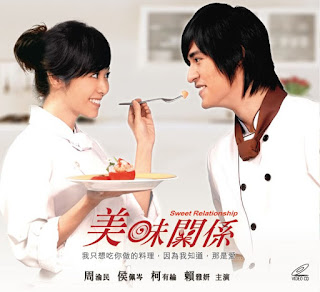 Yang Bai Hui (Patty Hou) has always been daddys little girl. All her life she had been tasting good food, and been thaught to critic it. One day her father suddenly dies from a heart attack, leaving her with almost nothing.
After a day of bad incidents, she comes across a resturant, Little Bear, were she is invited in. The resturant is owned by a Boss, who is nice and not as strict and his younger daughter. The head chef, Fang Zi Tian (Vic Zhou) on the other is hand is mean, brutal and cold towards anyone, who comes in his way, but makes the most delicious food ever. The last person in the resturant is the clumsy and easy-going Yang He Ma (Alan Kuo), who from day one falls in love with Bai Hui. As Bai Hui tastes the food Zi Tian made she is head over heels, since the taste reminds her of her father, and wants to, as she sais it, "be there where the soup is", meaning she wants to learn from the head chef.
Zi Tian refuses to take "a woman in" in the kitchen, but ends up giving her a task: if she can make a dish, that makes everyone in the resturant satisfied, she is allowed to become his assistant..

I really enjoyed this drama. It was fun, sweet and just the right amount of everything.
I really liked the characters, and the way they come across on screen (or whatever its called). The message(s), story, romance and cooking, were so intersting, that I watched it in 2 days row..
I was completely mesmerized by Vic Zhou, almost falling in love with him. The amazing thing about him is, that no matter which character he portrays, he does it so good and believeable, that I really loved his character. The actress, Patty Hou, was fun, good and sweet, was shocked when I found out that it was her first drama (and apperently she hasn't done any since). I didn't know about Alan Kuo being a actor, only knew him as a singer (he is the singer to my fave drama and song, so I was MORE than pleased to see him), and his acting and portraying of the character was great, and alot of fun. The only minus in this drama, which I have a hard time confessing myself, would be the ongoing madness of Ke Xin.. She is too much, and you REALLY feel pity for her, but then again, the exaggeration of her character was waay overboard... The crying scenes of some of the other characters made me laugh, instead of sad, thats a minus too.. All in all a great watch!!