My Girlfriend is a Gumiho Review 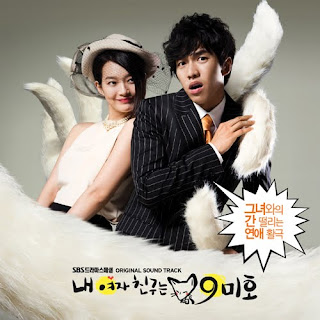 Calling Cha Dae Woong (Lee Seung Gi) arrogant isn’t quite the right word; he is a spoilt airhead to be exact. Ever since little he has seen his grandfather as some sort of money-bank, so when he asked about his future or what he plans to do with his life, he simply replies by saying that his grandfather has a lot of money. Because of the death of his parents, both his grandfather and aunt have been ignoring the selfishness, and most of his friends mooch off of him, except his two best friends. He is an ‘actor-to-be’, or he is going to acting college, and has finally the opportunity to become a star, much to his grandfathers displease.
One day, his grandfather is fed up, and decides to take him to a ‘special’ school, something like a military school. but Dae Woong manages to escape only to end up at a temple where a story about a Gumiho, a nine-tailed fox that eats human livers, lives.
The Gumiho (Shin Min Ah) is locked in a painting in the temple, and as an airhead Dae Woong is, she uses him to get out. On the outside, fleeing for his life, Dae Woong falls down a hill and almost breaks his back, but is saved by Gumiho, who gives him her bead, something like a part of her soul that helps her heal and gives her supernatural abilities. As Dae Woong wakes up, he gets to know the Gumiho, and she does not hide the fact that she is a Gumiho, even though Dae Woong doesn’t believe her. She then decides to not only follow him, but also to prove to him that she is a Gumiho by showing him her tailes, making Dae Woong terrified of her.
Back at the temple another apperent ‘non-human’ appears, Park Dong Joo (No Min Woo) who is some sort of hunter, and wants to catch the Gumiho.
To complicate matters, Eun Hye In (Park Soo Jin), Dae Woong’s noona and crush gets suspicious of the new girl, and tries to “figure her out”.

The moment I started this drama, I fell in love. The comedy was just the right amount, not cheasy and not silly, just perfect. You know, Korean dramas are brilliant because of their extreme lovestories, though 95% suck, the special 5% move you so deeply that you’d wish the drama never finishes. This is one of those. One, where you get nervous when they do, happy when they do and not to mention sad when they do. And honestly, they have to give Lee Seung Gi some award for being perfect as the mix of classical Korean hero/lead and modern humor sorce. The female actress did her job as Gumiho without flaw, and I TOTALLY bought is :P
One more thing I liked was the new personalities of the lead actors. The usual lead actor: arrogant/spoilt rich kid, and usual lead actress: strong/wilful poor girl. This time around it’s different, and these two don’t change each other, they learn from each other.
A complete and total recommendation, and OH! Cain & Abel has been knocked down from its pedestal -> This is officially my favourite Korean drama 