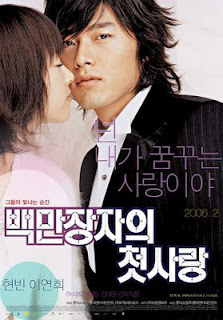 Kang Jae-kyung is a rich bad boy that got no respect towards anybody and believes that the world is controlled by money. He is an orphan and so he has been taken care of by his grandfather who dies and so when he turns 18 he thinks that he will inherit everything his grandfather owned. But it aint gonna happen. The grandfather requested that for x to inherit everything he has to move to and little town/village and graduate high school there. So he moves there and he meets and old man and a girl who he finds out is also an orphan. He slowly falls in love with the girl but finds out that she is sick. She has a weak heart and doesn’t have long to live. He also finds out something from his past. He remembers a few things. Like the time when his parents died and their orphanage and he also remembers a promise he made with the girl. But he cant really do anything because there is no cure to the girls sickness so he just stays by her side all the time.

I have tried to watch this movie at least 5 times. But every time I thought it was boring. But this time I guess I was just in a mood for this kind of movie. It got really emotional especially at the ending. And again it was this rich guy meeting a poor girl Pheew. But it was alright even though the story was typical. , Okay I’ve been really stupid. Its been 24 hours since I watched the movie so I cant really find words.. what to say. Omg im so stupid. I should do as Bunji. She smart. Anyway.

Bunji's Review:
I remember this movie being the only Korean movie I liked, but I couldn’t remember why. So I watched it again, and I now remember... This is by far the best Korean movie made, and I’ve not watched that many, but from those I’ve watched, this one is waaay better.
The couple didn’t have the BEST chemistry (with some couples, they just have to look at each other and you feel it: Yamapi & Keiko, Eita & Juri, Van Ness & Andy An, Mao & Matsujun and not to forget Mike He & Rainie Yang) but this couple didn’t have it. In this drama the dialogues, the storyline and the screenplay was what made it so wonderful. And the best thing about it, no supporting actor or actress making live miserable for the leading actors. Splendid! I recommend this, 100%!