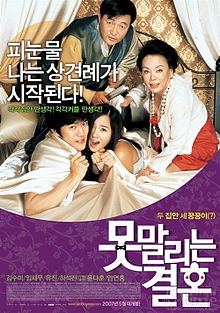 When Hwang Ki Baek (Ha Seok Jin), an arrogant and childish plastic surgeon, and Eun Ho (Eugene), a tomboyish girl, meet for the first time sparks fly in the air. Not only because their personalities are opposite, but also because of the way they meet.
Ki Baek, in order to make a girl interested in him goes parachuting, only to be almost scared to death. In fear he pulls the handle of the parachute, and make him and the professional fall. After the fall, he finds out the pro is a girl, Eun Ho. And as they were fighting she stumbles on top of him, ending in a kiss. The two bumps heads, and try to make each other suffer, only to end up falling for one another.
But everything is not as easy as it seems: Ki Baeks mother, Mal Nyon (Kim Su Mi) is a wealthy woman with a lot of arrogance. She wants to make a golf course, but is not able to buy all land, because of a man who refuses to sell. That man happens to be Ji Man (Im Chae Mu), Eun Ho’s father. A simpleminded man, who has no intentions in backing down.
Now how are Ki Baek and Eun Ho get married, when their parents hate everything about each other?

It’s not bad, pretty entertaining actually, but it is just tooo fast. Everything happens half heartedly. The love story, the feud and not to mention the reconciliation. It’s as if they don’t even talk, which they do of course, but it’s just one word and they are in love… I think, its not even longer than 10 min, the affection parts…. Anyhow, it’s fun, I laughed, was shocked, choked and was fully entertained. So it ain’t all that bad :P