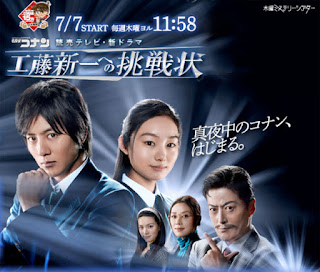 Before Kudo Shinchi (Mizobata Junpei) was poisoned, a series of crimes were committed that Shinchi solved. Kudo, Mori Ran (Kutsuna Shiori) and her father, Mori Kogoro (Jinnai Takanori) wake up in a white room unaware how they got there. Just as they try to find out what has happened, they get a letter signed to Kudo, asking him to solve the riddles given, if not something bad is going to happen. Will they get out? Will Kudo solve the riddles that are going to lead to his freedom?

Tis is a typical ‘late’ Japanese drama, low pay; meaning low quality and weak screenplay, but somehow manage to get popular actors.
I like the drama, mainly because I love the manga and anime, so the live action was perfect for me. Yes, occasionally annoying, since it doesn’t follow the manga that much, but on the other hand tries real hard to do so.
It’s fun, and really not that bad..