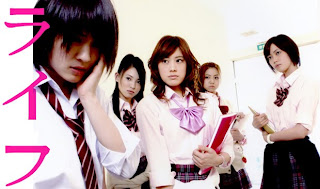 When Shiiba Ayumu (Kitano Kii) starts at high school she is warmly accepted by Anzai Manami (Fukuda Saki), but what she doesnt know is that she started hanging out with the wrong group. She makes a promise with Manami, tells her that she will never betray her. But when she tries to make things good between Manami and her boyfriend Sako Katsumi she is misunderstood, and that is when the bullying against her starts. She learns about real friendship and the fight against bullying. This drama shows the dark side of school life and group-bullying. Its extreme bullying and the bullies even threaten people outside from school trying to make others fear them.

Its my first time watching a serious drama about bullying, and this was really extreme for me. It wasnt a very long drama and not really much of a story or a problem except for fighting against bullying. I think (the drama makes me feel this way) that bullying is something most japanese young people do not really know much about or at least dont do anything about it. Its something they should make more clear at school instead of trying to hide it. They should be more educated about it especially if its going on like this at schools. Also that the parents should be more into their kids. Like those rich people thinking their children are either perfect or beating their crap out of them because they think they arent worth anything. Its just all so stupid i dont get it, it makes me...gaah, angry. Of course this kind of bullying exists all over the world not just japan, might have made it sound like that haha. But its definitely an educative drama and not for entertainment.