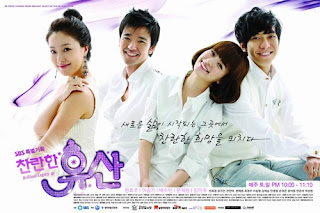 Being the daughter of a wealthy business man, Go Eun Sung (Han Hyo Joo) lived life without worries. After the death of her mother, her father re-marries and adopts the daughter of the woman. Go Eun Sung, her father, little brother with autism, her stepmother Baek Sung Hee (Kim Mi Sook) and her stepsister Yoo Seung Mi (Moon Chae Woo), have been a family for seven years. One day, Eun Sung returns from the states, where she studies cooking, and by accident switches bags with a fellow passenger. The passenger happens to be Sun Woo Hwan (Lee Seung Ki), the grandson of multimillionaire business woman Jang Sook Ja (Bae Hyo Jung), and the oppa of Seung Mi. Not alone does he have a weak temper and is EXTREMELY spoilt, he also keeps bugging and accusing Eun Sung for, in his opinion, stealing his bag, which ends up making Eun Sung miss out meeting her father for the last time, before he suddenly dies.
After the father’s death, Sung Hee throws out Eung Sung and her little brother, making them homeless, mainly because of money. Shortly after that the younger brother goes missing, which Eun Sung blames Woo Hwan for, since the little brother would have called her on her cell, if it wasn’t for Woo Hwan breaking the phone, before leaving the house.
At Woo Hwan’s home, the grandmother is fed up with her useless grandson, her daughter-in-law, who doesn’t know how to cook or clean, and her granddaughter, who uses her hard-earned money on useless stuff. So she decides to go out, dressed like a poor woman, to remember the times when she didn’t have a huge company. She ends up falling down a staircase, and hitting her head, losing her memory. Eun Sung happens to be there as it happens, and takes care of the old woman, and lets her stay at her place. Meanwhile, Woo Hwan’s counsin, Park Joon Sae (Bae Soo Bin), befriends Eun Sung, and slowly starts to fall for her...

This drama IS 'shining', from the very beginning to the ending. I loved how the characters are portrayed, how they interact and the pace. I remember watching episode 4 and was worried that there were only 24 episodes left! I was worried that it would have a 'loose-ends' ending and I didn't want the story to stop. I liked that all the problems are shown in episode 1 and 2, and there after it just goes on to solve them. The issues in this drama are beyond saving, I mean, a mean stepmom, death of a loving stepfather, the missing of a little brother, jealousy, hatred and not to mention money.. The fight to get money. As I was checking out the drama, I read a review somewhere, about the stepmom being "super-evil", and I have to say, I was stunned as well. She is a villain, a smart villain. She knows people, and is able to read them, which is insane. She plans everything, and is able to ruin several relationships, in order to get what she wants, crazy! Not to spoil anymore, I have to say definitely a favorite!

Okay, I just finished this! Puuuh, This drama definitly destroyed me! Bunji, u said the problms are shown in episode 1-2 and then they begin to solve the problems? Here is my view on the drama: Througout th whole drama, episode 1-26 is all about million of poblems.. the dont solve them, problemerne hober sig op, og til sidst skulle man tror der ikke kunne komme mere problemer, men nej.. i episode 24-26 kommer der så mange problemer, at jeg tror det vil ende med at hovedpersonerne bare dør, det ville være en okay slutning for mig, bare den onde stepmor og Eun sung holder op! Men de to sidste episoder were refreshing :) I liked them.. unbelievable all the problems were solved, and i could breath again xD But the main couple were AMAZING! I loved them!! (Especielly Lee seung ki, he is the main reason i watched this drama, and he didnt let me down! Kyaa) Now back to my life.. while watching this i forgot everything.. my school.. pligter.. aftaler.. jeg var bare hjemme foran bærbaren, jeg begyndte endda at se den i timerne.. daa bichosso! I'm glad i finished this.. Da jeg var midt i dramaen I wished that I never watched this, in the first place, but in the end, i'm glad i did it! I would give it 5 out of 5 hearts, cuz it gave me all kind of feelings.. but only 3 out of 5 stars.. that bitch's character spoiled the drama.. also the grandmothers family, they were too ridiculous. Last word: Lee Seung ki Hwaiting !!

Lol, how the hell did i miss this comment? xD

It's fun to read all kinds of different reviews of the same drama :D hahah...