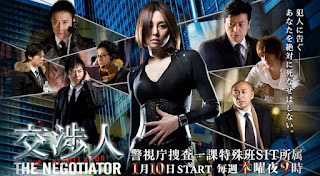 Usagi Reiko (Yonekura Ryoko) is a tough police woman: she is strong, wilful, smart, and not to mention stubborn. When she finally enters the SIT (Special Investigation Team) who works as a negotiating team, she is faced with opposition from not only the criminals, but the rest of the male dominant team, being the only woman there. Kirisawa Keigo (Jinnai Takanori) the head of the department sees her as a huge burden and can’t see why a woman is to be let on the team. Together with her there is another newbie, Amari Yusuke (Takaoka Sousuke), who is treated differently because of his gender, but has less of a brain than Usagi. Besides having to deal with the men in SIT, she occasionally visits the mentally disturbed convict, Mariya Kyosuke (Shirota Yu) who was the main suspect in a case involving her father’s death, 5 years ago...

To be honest I started this drama because I missed Japanese dramas, and what other to watch than a drama that’s about a woman’s fight in a man dominant world? And as I was watching it I thought it was pretty dull for a police/action drama. But I ended up liking it. When I started watching this, I was annoyed, because I thought I didn’t have ‘the red thread’, meaning something linking the story together. I was wrong. I should’ve gotten used to Japanese drama already; they all have one MAIN story, followed by small ones. Though not all succeed, this one does it remarkebly well.
The actress Yonekura Ryoko I’ve never seen or heard of before, but I’ve become a fan (though I find her staring odd, creeps me a bit). The performance I was blown away by, was by Shirota Yu, like can you say AMAZING?! Now I’ve seen him as a bully, geek and a mental person. I put very high standards on crazy people, because you need skill and you need to give that “chill feeling “, in order to make it believable, which he scores pretty high on. To sum up, GREAT watch!