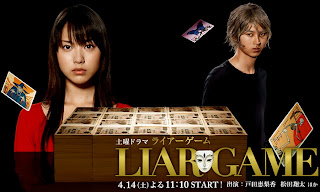 Kanzaki Nao is an extraordinary girl. She is extremely honest and kind and wouldnt want to hurt anyone, she just wants everyone to be happy and does whatever she can - or cant - just to please them. But then... one day.. she receives a package. Of course she doesnt suspect anything so she just opens it, and inside there is one hundred million yen and a card that says if she opened the package she has to participate in Liar Game. She now has to either trick the hundred million yen out of her opponent who turns out to be her former teacher. How is she gonna manage? will she succeed or is she gonna end up with a hundred million debt ?

I am soooo late on this drama i know, lol, but i guess if i am there must be some others as well so here's an review anyway :P The games they play are like extreme, its extreme how they trick one another and im just sitting there like "whaaa...". So if you're into those mind game dramas this is definitely one you gotta watch. But i still somehow had a hard time watching it. I mean, it wasnt boring, but it wasnt exciting either, yeah it was interesting, but not the interesting that makes you excited. Lol, but it all depends on what you like watching. Maybe because its a bit old. I just wasnt satisfied it wasnt good enough like some other mystery dramas/movies.

Bunji's verdict
This was one of the first Japanese dramas I’ve watched, and I loved it. I loved the psychological part, Toda Erika and Matsuda Shota, heck I even remembered his characters name long after I finished it, but didn’t remember the leads…
It’s one of the few great ones out there; with a brilliant cast, brilliant storyline and not to mention crazy twists. It’s recommendable for people with the likes for messed up confusing dramas - like seriously messed up and confusing…