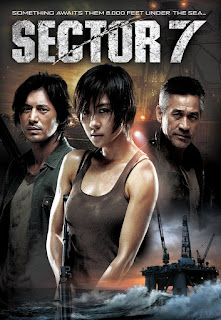 In the Pacific Ocean an oil platform called Sector 7, a drill crew is having hard time finding oil. After spending several months, the manager calls headquarters in order to get the crew home.
Cha Hae Joon (Ha Ji Won) has been living almost her entire life on Sector 7, and it’s also the place her father mysteriously disappeared. Hearing that they are to leave Sector 7 without finding any oil, she starts a fight with the manager, creating fuss on the platform. When her father’s former partner Lee Jeong Man (Ahn Seong Gi) returns and tells the crew to give him a shot at the drill, everything seems normal.
Suddenly people die, first a young member, followed by the nurse of the crew. At first the death of the youngster is not considered, because his death seemed normal, but after the nurse dies, suspicion towards her fling is made. Shortly after, the doctor dies; one after another people die, or go missing and they are left all alone without any form of communication with the world…

One word: bad. This movie, I mean seriously why it was made, and why this storyline, I can’t comprehend.
The overall is just silly, and God it’s boring. Yeah, cool with the monster and everything, and yeah fairly made also, the entire graphic and all, but simply one of the longest 1h and 40min in my life. Lol, okay, I may exaggerate, it’s not THAT horrible, but daim it comes close. And you may get shocked to see the rating, but I most defiantly will not give it more, nor do I recommend it. If you are looking for a reason to watch it, watch it because of the cast, they seriously try their best. I feel that they were soooooo daim busy showing how ‘cool’ Cha Hae Joon was, but with a face like that and with her voice, so not gonna happen, not matter how many flying motorbikes she rides, or how many beasts she faces…