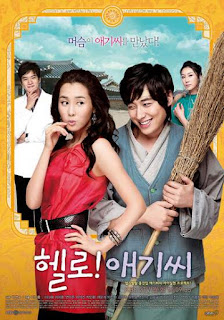 Being the 38th granddaughter of the Jae Ahn Lee clan, Lee Soo Ha (Lee Da Hae) grew up as an 'Aegisshi' - princess. Her father was chased out by the elders of the clan, since he had had an affair with a woman, when Soo Ha was younger, which happens to be his current wife, with whom he has two children with.
Hwang Dong Gyu (Lee Ji Hoon), the chief of Finances in TOP group, and the oldest grandson of the the president, meets Soo Ha, in order to buy the land, Hwa Ahn Dang - the land where the Jae Ahn Lee clan is. The two bump heads, and he returns, emptyhanded, much to his grandfathers dislike. In order to save Hwa Ahn Dang, Soo Ha goes to raise money, by performing, destiny strikes, and she meets the second grandson of the TOP group, Hwang Chan Min (Ha Suk Jin), a player who has the least interess in bussniss. Matters collide, and Soo Ha ends up slapping him, getting him interested in her.
Dong Gyu on the other hand refuses to let her get her way, so he keeps bugging her about the selling of the land, and to make matters even more complicates, the TOP groups model Suh Hwa Ran (Yun Mi Joo), has a secret that has something to do with Soo Ha suffering..

Well, I can say it's interesting. I don't hate it, but it didn't leave that big of a impression on me. It almost felt like the drama was a bundle of typical korean sceens, and yet no solid ground. It had all classics; the confessions on the phone when drunk, the supporting actor being selfish and demanding the girl, the girl constantly loosing faith in the lead actor, the supporting lady is a bitch, and not to mention the typical story with the head of the family disagreeing to the realtionship. AND STILL, it didn't cut it for me. The actors were really good, and even though I dislike Lee Da Hae, it didn't matter, since she did good acting. BUT, the story was either too short, or too muddled, I really can't make up my mind. Even when writing the resume, I was thinking "WHAT really happened".. But it does get your attention, and you do wanna know what's going to happened. So have fun, and make up your own mind around this one, because it left me clueless..