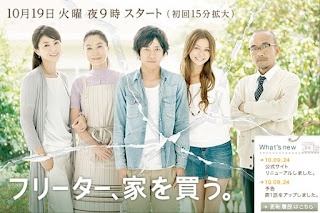 
The story revolves around the 25 year old Take Seiji (Ninomiya Kazunari) who quits his job after only being there for three months because he feels unappreciated by his boss. But the problem is; now he can’t seem to find another one. For a year he has several part time jobs, but due to his stubborn personality he quits then shortly after. Getting criticized by his father all the time, and being unable to keep a job, he ends up becoming a hikikomori. This changes though after his mother falls ill with depression, he immediately finds a highly paid job. The only highly paid job he’s able to get: at a construction site. Here he meets Chiba Manami (Karina) who is the complete opposite of him, the two butt heads, but soon get a mutual understanding..

I’ve known about this drama for some time, but the story never really spoke to, sounded too serious for my taste. But when I actually started it, it was somehow refreshing. Nino is the one Arashi member that I wasn’t that fond of, and I’m not saying he is now, but somehow, I gotta take my hat off for him. He does a splendid job as Seiji, and he impressed me with the emotional scenes as well. I actually would recommend this drama, mainly because of this family, pretty average but likeable. Thumps up!