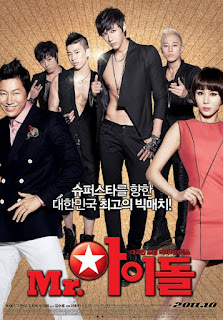 After the live suicide of the main vocalist, Mr. Children had been forgotten for years. The group dissolved and the PD Oh Goo Joo (Park Ye Jin) alienated herself from the world. Three years later she returns in the hopes of bringing Mr. Children back to the lime light. She assembles the group consisting, Ji Oh (Jay Park), Hyun Ie(Jang Seo Won) and Ricky (Kim Randy) but has one issue: no vocalist. After an audition she finds the one she wants, Lee Yoo Jin (Ji Hyun Woo) a working fella, who loves music, but also loyal to his band, which is the reason he refuses. Later that evening, two band members leave due to personal reasons. Goo Joo tries to change his mind by following him everywhere, and finally manages to make him join, by paying for a hospital bill, and telling him to pay her back.
This is the beginning of the rebirth of Mr. Children…

I watched this movie mainly because of Jay Park and because the trailer looked neat, honestly trailer is better than the movie. It’s not bad, it’s just not great. I felt that there should have been more about the group bonding, instead of the PD and leader bond. It’s unnecessary, and honestly, not that interesting. Though I liked the overall theme, I found myself confused a lot of times, and I still can’t figure it out.
On the other hand, the storyline is good, pretty typical, seen it a couple of times, but not bad because of it.
All in all, an okay movie…

Jenji's verdict
This is a very "thin"(?) movie. I get the story and all, but it's a bit ridiculous because this is almost just about the PD and her mistakes and so on. Yeah we get to see(kinda) the band bonding and stuff and I think it tries to show that it's important to have those specials bond when you chose to sing in a band/group.  But then again I felt like I was watching a movie about two different bands twice with just a different ending, I get it if thats the purpose but then it was quite badly done. In my opinion. I didnt learn much. I was just watching Jay Park and others lol. And this is probably my problem but I had a hard time concentrating because of Park Ye Jin and Kim So Ro because I kept thinking of Family Outing and other variety. The movie could have been better with some better focus on other things, there was too much waste-movie. I feel like I'm dissing this movie a bit too much, but I've seen much better movies. Then again this is all MY opinion HAH!