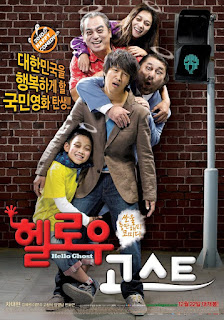 Kang Sang Man (Cha Tae Hyun) grew up an orphan, with no family members and no one to take care of him, also without a single friend. After being laid of his job he feels that he doesn’t have anything to live for, so he decides to kill himself. But for some reason he is simply not able to, as every time he is about to die, he wakes up. As a last resort he jumps off a bridge, but wakes up in the hospital, with the ability to talk to ghosts. Four of them make contact with him: a small and fat man that smokes cigarettes a lot (Ko Chang Seok), a middle-aged woman who keeps crying and says she’s sorry(Jang Yeong Nam), an old perverted man that loves his soju (Lee Moon Su) and an elementary school student that loves to eat (Cheon Bo Keun). The reason he isn’t able to die is because they won’t let him, until he fulfills their wishes. As he is fulfills every wish, he meets Jung Yun Soo (Kang Hye Won) a nurse who works at a hospice, whom he falls in love with.

I started this watching this movie because of two reasons, firstly well Cha Tae Hyun, secondly I wanted a great laugh. To be honest, I never imagined loving it this much. It completely caught me off guard, I totally never expected the ending, even though I’m seriously used to these twists…
Anyhow, Cha Tae Hyun is a great actor, all your money worth, I mean I have never been disappointed in watching his movies (yes, this is my second, but still I would totally buy this movie). Completely recommendable!


Jenji's verdict
First I gotta say I really love Cha Tae Hyun's movies he's such a great actor and fits those comedy, family roles. It was a good story I think and really surprising ending, it had a really good end. But it good a bit long for me I think or it didnt have the excitement like some of his other movies, but definitely not a bad movie, quite good actually. It was a bit weird too lol a few time I was thinking "what the heck.. O_o " Maybe the story was a bit weird but still good. Do you get me? hahah,,, I admit I watched it some time ago so its not,, fresh memory. Sorry!