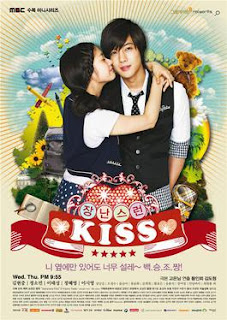 The identical story, and complete remake of the Japanese Itazura na Kiss, except for small changes like the fathers job and the characters names. Oh Ha Ni (Jung So Min) is a ‘stupid’ student, who has a crush on the smartest (or should we say genius?) student Baek Seung Jo (Kim Hyung Joong). She is head over heels in love with Seung Jo, only the problem is that he couldn’t care less. Seung Jo is not only arrogant, but also rude and has a huge ‘fan base’ (meaning that Ha Ni isn’t the only one in love with him). After he publicly humiliates her by making and idiot out of her, Ha Ni decides to give up on him, she thinks. But as her house is caught in an earthquake, as the only house in the entire street, she and her father move into her father’s friend’s house, who happens to be the father of Baek Seung Jo.

Honestly, found it ok. I wasn’t expecting much of it; since there are two other of the same kind, but I ended up thinking it was pretty good. On the other hand, there wasn’t much ‘uniqueness’ about it; same apperent reactions and almost ‘fake’ acting – meaning the actor acted an actor, and pretty badly. The only one doing his job and making his character his own, can’t believe I’m saying this, was Kim Hyung Joong. Every other actor was pretty dull, especially the lead actress, who ended up becoming so useless that her character could have been replace by a pole. Huge minus is that everyone around her was too busy making her seem so stupied, but failed so miserably that it just felt like she was being bullied. If you've read the manga you would know that she is EXTREMELY stupid, not 'silly'. People around Hyung Joong were useless aswell, and it ended up with him trying real hard to make the drama good, but how can a romantic comedy be good, if everything else is dull.
But thanks to the splendid acting of Hyung Joong, I managed to finish, and like the drama. The storyline is the same as Itzura na kiss, and it has the same features as It started with a kiss, but different than these two, its more modern, meaning it’s easier to relate to. On the other hand if I were to choose one of the three (ISWAK, PK and INK) I would choose ISWAK, and I’m not that big of a fan.

Jenji's verdict
When i started watching the drama i thought it was reeeaally funny, even though it was like really typical. And omg korean , how do korean come up with all these problems, its like one problem after another and it makes my stomach hurt. but in the end it was alright and i liked that it didnt just end with them getting DONT READ ANYMORE UNLESS U WANT ME TO SPOIL IT -married .
OKAY READ AGAIN. But i couldnt really like.. it was weird with like really EVIL seung jo to change to like the really nice guy . i mean it was like a whole other person when he realised his love.. Bunji says one is his love and another is his personality.. i guess.. so.. but then again the taiwanese version, which im planning on maybe watching, has like 2 seasons and in this one, the korean, everything is squeezed into 16 eps. Anyway even though it was typical and all i guess it was a nice drama still, and i dont think the girl is a bad actor i think she is okay and kim hyun joong aaahh nice seeing him in a drama again,, aaah he was so kyaaa in the end. And the mother omg she was .. hah. like she is really crazy hahaha. The ending was nice too. But it was like going back and forward all the time with seung jo and ha ni's relationship.. Fun drama.

HAHAHAHAHA ".. so useless that her character could have been replace by a pole.." omg hhahaha ,,

the character i mean..