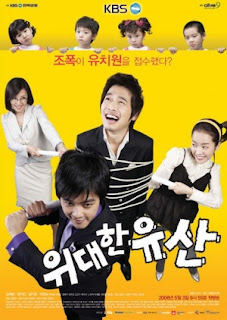 Due to his sad childhood, Kang Hyun Se (Kim Jae Won) was taken in by a mafia boss, who helped him by accepting him as a son. Different from other gangsters, Hyun Se doesn't like to use violence, but wont hold back if he's asked to use it. His life changes as his birth mother, whom he had tried to cut ties with, dies and leaves a will, where it says that Hyun Se is to inherit the kindergarten she owns. At first he tries to sell the kindergarten, and bumps heads with Yoo Mi Rae (Han Ji Min), a kindergarten teacher whom he had encounterd before, but as the kindergarten director Go Ah Ra (Lee Mi Sook) talks to the inheritage lawyer, they find out that Hyun Se has to work as a teacher for 100 days before getting the kindergarten. Hyun Se refuses, but as he finds out that his boss needs the land, he ends up agreeing to become a teacher for 100 days.
As Hyun Se and Mi Rae start to devolp feelings for one another, the ex-boyfriend of Mi Rae, Choi Shi Wan (Kim Ji Hoon ) returns to take her back, and to complicate matters more, he is competing company to Hyun Se's boss, meaning he also wants the kindergarten..

When I started this drama, I thought it would be a faveorite, which is rare for korean dramas. It's fun and the kindergarten children are waay cute! The lovestory was good, just didnt feel it, might be since I'm used to draining korean lovestories, which this drama isn't. The negative in this drama is the bussniss part, which consumes a big part of the series, and to be frank, it's insanely boring. But the children are soooo worth the watch. Kim Jae Won I only know from 100 days with Mr Arrogant, but he does this character pretty well and he looks pretty good :P. To sum up, good watch :)