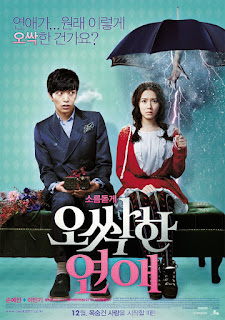 Jo Goo (Lee Min Ki) is a magician famous for a special act, where he summons a ghost, and the ghost attacks someone from the audience. The entire thing is acted and the ghost is played by a weird girl called Yoo Ri (Son Ye Jin), who was the actual inspiration for the act. Being anti-social and avoiding people, Yoo Ri always makes excuses not to join the get-together with her colleagues, much to the team leader, Jo Goo’s, displease. When he finally manages to make her join, she goes nuts by talking about ghosts, and even rips his shirt. The following morning she calls to apologize, but hangs up when she hears scary sounds. These sounds are also heard by Jo Goo, and he, unwillingly, goes to her house to check up on her. There he sees that she in fact is weird, and he meets a little boy with whom he plays hide and seek, but for some reason Yoo Ri seems unsettled.
The same evening, Jo Goo sees the kid in his house, running at him and in his house. This makes Jo Goo run out and call Yoo Ri. When Yoo Ri arrives she tells him about her past, and her ability which he is involved in now…

I don’t know where to begin… This movie is NOTHING like any of the other movies I’ve seen, EVER. It’s funny, creepy, sweet and not to mention cute, and somehow they balance pretty well. The actors are great, the chemistry is not bad either, lol, and the screenplay is fun… There is nothing bad about it, it just is a go-by movie, meaning you have a good laugh, smile, and yeah, that’s it… It’s not hearts racing, nor is it heartbreaking, but I could say recommendable : )

Jenji's verdict
WOW, first of all, Hi I'm a new fan of Lee Min Ki ~ ! This is my second time watching him, I watched him in shut up flower boy band, and he was really good. He seems like such a professional actor waaaah~ like he gives his character a special character, does it make sense?. He was really awesome. Anyway back to the movie. Yeah I shouldnt watch ghost movies before going to bed hahah! Though I really liked the movie a lot! Like Bunji said, funny creepy and sweet all in one, I almost screamed a few times because of the ghost thingy (Bunji can watch almost any ghost movie, she is immune to them!), but at the same time I laughed all the time and it was really sweet. Though somehow it felt like.. its not the normal kind of ghost movie where they make the movie because,, well because they want to make creepy ghost and then just add romance, this was more like a sweet romance with a ghost story. Recommended!

I was considering watching it, now with your rating, I definitely am

hmm, well i think its okay, lol, i think it would have been better with good subs.. cuz i didnt really get much, only the amount of which i understand korean, which is sort a limited...