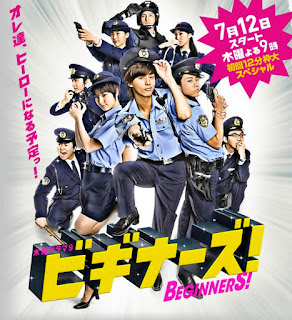 The story revolves around 9 police academics, put together in an S class in a police academy.
Shimura Teppei (Fujigaya Taisuke) is an ex-delinquent, whose father once was a police officer. Onda Yuichi (Mori Ren), his best friend, has asthma, and has always had troubles with his health. The two have been unseperable since young, with Teppei protecting Yuichi and Yuichi helping Teppei with his studies. When young, the two promise each other that they are going to join the police force and become police officers when they grow up, but as time passed the two slowly grew out of their dreams, until Yuichi reminded Teppei and actually saved Teppei from a fight. They hand in their applications and are accepted, which excites them both.
Momoe Hiro (Gouriki Ayame) is somewhat clumsy and comes from a decent family, so in order not to be a burden on her family she decides to join the police academy. Tachibana Danji (Kitayama Hiromitsu) is a son of a wealthy man, and decides to join the police force due to his past.
When Yuichi comes late to school, partially Hiro’s fault, their instructor doesn’t see lightly on it. All are put in a special S class; and they soon find out that S isn’t the S they hoped it to be.

I started watching this drama because of Taisuke, whom I’ve started to like (maybe a bit too much :P), but as a whole its really good. The quality is neat, and the actors are actually good level, not the typical 2nd rate acting - of course there still are some of that level - and Taisuke was great as well, actually improved a lot.
It’s a different kind of drama and yet, so typically Japanese. I do recommend :)