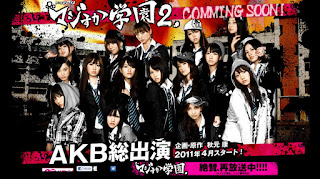 After getting the teppen (top), Maeda Atsuko (Maeda Atsuko), an uproar started amongst the freshman and the rest of the school, led by Nezumi (Watanabe May), and her companion Center (Mastsui Jurina). But for some reason, Maeda had left the school, and has announced that Otabe (Yokoyama Yui) is the new president (which is only possible id the current president is beaten, In this case Maeda). If that’s not enough, Yabakune High School, another Yankee school, whom Majisuka had a truce with, gets a new leader, and buries the truce. The leader happens to be no other than Shibuya (Itano Tomomi) the ex-queen of the four queens of Rappapa, who has betrayed Majisuka because of a grudge on Maeda for beating her.
Now Majisuka High has to fight the terrorizing Yabakune High until Maeda returns.

I have to admit I liked season 2 better than season 1. In the first one it was just about getting the top and fighting till dead, but season 2 is about protecting what you love, in their case their school and the reputation of the school. I love the fact that it didn't just focus on Maeda, but gave the others room to not only shine but also progress, and show a more experienced side of themselves.. All in all, I like!