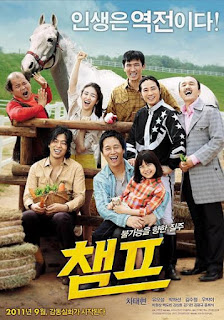 Being a famous and successful jockey Lee Seung Ho (Cha Tae Hyun) aims for the finals. His dream is to win and to finally have a wedding with the mother of his child.
One they, as they are driving home, they end up in an accident, where his wife dies, and to top that he hurts his eyesight. Three years later he is working as a stable cleaner, works occasional jockey jobs, and plays fixed games to support his daughter Ye Seung (Kim Soo Jeong). When he is chased by bookies for a game he lost, he flees with his daughter to Jeju Island, where he meets Horse Trainer Yoon (Yoo Oh Seong), also the man that was involved in the same accident Seung Ho was. In that same accident Horse Trainer Yoon’s best race horse Wu Bak, became crippled, and has trust issues, so it can’t be tamed. In order to save Wu Bak from being sold to a factory, Seung Ho decides to take up the challenge and tame it…

Lol, lousy review, sorry.
I watched this movie mainly because of Tae Hyun, and honestly worth every minute of it. He has a way of choosing a movie, seriously. And daim that horse can act, I mean really. On the other hand it had a lot of silly parts too, but it’s okay, nothing too ridiculous : )
The movie is very inspirational, and makes you totally warm while watching, not to mention the father-daughter moments, CUTE!
Recommendable? Hmm, yeah.. It’s one of the “feel good” movies..

Jenji's verdict
Wonderful family movie with a great plot, I thought it was a bit long at first I was like "when is this ending" lol but it still was worth it and I like that it is that long anyway because it had a greater story, it might not have been as good if it was shorter. It is really cute and great for horse/animal lovers because its about the relationship between human and animals. I even watched it twice with my family and they loved it too. The actors I think are really great too, even the horse, it was just a great movie I cant really find anything wrong with it. Oh yeah there was a point when I though "oohh no come on" because of some special effects but it didnt ruin the movie. Really lovable movie to watch alone or with family, deff. one of my favorite Cha Tae Hyun movies. Also he fits so perfectly to the role of a father and especially with his little daugther hihih.