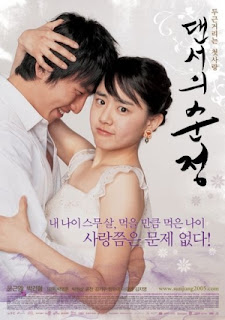 In the finals of the Korean Dance Championship Na Young-sae (Park Geon Hyeong), full of feeling for revenge, provokes his rival Jung Hyun soo (Yun Chang), which ends up bad for Young sae, not only does he loose, he gets injured and refuses to return to dancing. After the incident, his boss (which I think is some form of gangster), tells him about a Chinese dancer, Jang Chae min, who not only is good but has won awards before, the only problem is he has to register a ’fake marriage’ so she can stay. After he picks her up, and the two register, Young sae finds out that she is in fact Chae-mins little sister, Jang Chae rin (Moon Geun Young), who not only does know how to dance, but has almost zero talent in learning it. But in order to win in the next competition, he decides to teach her, which is the beginning of a beautiful love story.

I have to say my review doesn’t really make the movie justice, it’s actually better than how it’s written. Honestly, a good movie, I don’t know if I’m starting to fall for Korean movies, but this one is pretty neat, and it has the ’fururu’ feeling in your stomach. The cast is great, both male and female, and damn they can dance.
One thing sort a blew it, the last 30-40min were a bit dull-- okay, the last 20 were quite cute, but I felt it was a bit draggy. The story was great too, actually recommendable : )