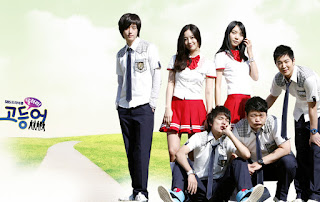 Cha Dong Chan (Lee Min Ho) loves soccer, except for that and fighting, he is bad at everything else. As he finally gets the chance to play, he ruins it because of his temper, and even though it’s not his fault, he’s blamed for it. The school he is part of is a prestigious school, also a corrupt school that favors rich kids over the poor. Dong Chan happens to be poor, so no matter what happens he’s blamed, well, the fact that he is bad student doesn’t really help him either.
After being kicked out of the soccer team and being mistreated by his homeroom teacher, he is told that its better he writes a resignation letter than being thrown out. As he hands in the letter, a new classmate joins, Min Yoon Seo (Moon Chae Won), the girl he fell in love with after she head butted him like his idol Zidane did in 2006. He decides to stay, but gets warned by the homeroom teacher, if he gets one more absent day, he’s out. By trying his best to not make any fuss, he un-deliberately gets in the middle of it.
When the soccer star Baek Hyun (Kwon Se In), who has a past with Yoon Seo, tries to win her back, Dong Chan is in crisis, also the hot-blooded class president Yoon Sae Mi (Jung Yoon Jo) seems to have found an love interest in Dong Chan, which Dong Chan can’t comprehend..

Aish, really disappointing.. I for the first time rooted for the supporting actress with all my might, and for some weird and silly reason he chooses the lead. Okay, I knew he liked her, but why on earth did the director focus so much time (7 episodes to be exact) showing how good the lead actress and the supporting actor are? What struck me, which I really still can’t find a meaning in, is when the hell did she fall for the lead actor? I really preferred the supporting actress, she had more character, and really liked her with the lead actor, why the director made more screen time for them, if they weren't going to end up together, simply can’t get into my brain.. Seriously..
It was so good, and then this happened.. tsk..