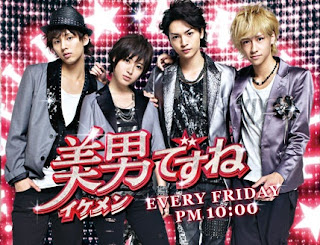 This drama is the Japanese version/adaption of the Korean drama, You’re Beautiful.
Sakuraba Miko (Takimoto Miori) has devoted all her life to the convent she grew up in and is a soon-to-become nun. When the day for her, to get her ticket to Rome, to become a fully-fledged nun, arrives, she meets a man claiming to be her twin brothers, Mio, manager. He tells her that her brother has broken his nose in a fight, and that he needs 3 months of recovery, but he has to sign a contract today, with the super popular boy band A.N.JELL consisting: the leader and main vocalist Katsuragi Ren (Tamamori Yuta), the bassist Fujishiro Shu (Fujigaya Taisuke) and the drummer Hongo Yuki (Yaotome Hikaru). He asks her to act as Mio just for the day, and sign the contract. At first she refuses, but after thinking about her brother’s childhood dream of becoming a singer, and how big this opportunity is, she agrees. As she signs, she meets with other band mates, and soon finds out that the leader doesn’t like her being. After signing she is asked to join A.N.JELL for the next 3 months, just so her brother can recover and return. Shocked by the request and the fact that she has to share a house with three males, she goes to the airport and decides to go to Rome. But as she stands there, she has second thoughts: she finds out the reason for her brother’s wish to become a star, was so that the two of them could meet their mother.
So she decides to stay, and act out as Mio, only pretending to be someone is not as easy as it seems, not to mention pretending to be a boy when you are not…

I have to admit it’s pretty good, even though I don’t love it. Heck, I didn’t even love You’re Beautiful, so that makes sense right? Instead of saying it’s a copy of the Korean drama; I would rather say it’s staying true to it. We all know it’s adapted from YB, so can’t fuss about that.
I didn’t really have my hopes up for it, because it’s darn hard to beat the original A.N.JELL (Jang Geun Suk, Yong Hwa and Hong Ki), but they did a great job. The actor that was playing Geun Suk was neat; good pick, and nicely acted. He sort of made the character his own, amazingly.
I don’t know why, but I somehow had a different feeling of this drama; I felt that Ren (the Japanese Geun Suk) and Shu (the Japanese Yong Hwa) were, well, childish. And somehow that the character Yuki (Jeremy / the Japanese Hong Ki) was cool… I didn’t even fall for the the original, whats with that… Also, I don’t remember the supporting actress being such a bitch. Hmm…
On the other hand, liked the ending waaaaay more, and felt it ended decently. Recommendable, sort a..