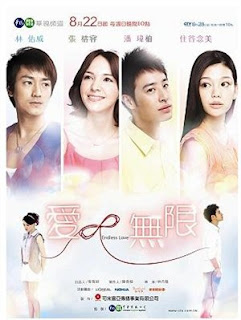 When the poor Liang Jing Hao (Wilber Pan) is struck by fate, he meets the rich Song Rui En (Sandrine Pinna), and by accident ruins her dress. While Rui En demands compensation for the expensive dress, Jing Hao, who by the way works hard in school and works low paid jobs to support his father with Alzheimer, shows compassion and understanding towards Rui En, which makes Rui En like him.
Due to Rui En’s spoilt childhood, she ends up seeming cold and arrogant towards Jing Hao, especially due to the fact that it takes him time to pay her back. When he pays her back, he isn’t able to pay his father’s nurse, so she leaves, and Jing Hao faces problems taking care of his father.
After a lot of misunderstandings, the two of them become friends, and soon, after loads of hardship, lovers. But when Jing Hao finds out that the hit-and-run killer, who killed his mother, is Rui En’s father, he is not sure whether or not they are meant to be. When his father disappears on their wedding day, and they shortly find out about his suicide, Jing Hao decides to end the relationship, leaving Rui En with nothing but a voicemail.
Three years pass, and Rui En works as a street-artist, with the hope of seeing Jing Hao again, little does she know, ‘the red string’ joins them once again..

To say it bluntly, it’s okay – a little typical and awkward – but okay. I liked the thought of it, and several ideas, not to mention quotes, but it was weird. It started off, being interesting, and had a unique taste to it, but towards the end it just became too messy and confusing. Being a Wilber fan, I had to watch it, and I have to admit he’s become better at acting since Miss No Good. For the first time I actually thought of him as sexy. Ha ha. As I started this drama, I really didn’t like the main actress, but while watching it I found myself liking her more and more.
The supporting cast I didn’t mention in the review, but I really was annoyed at them. Both the male and the female made me not only yawn but sigh every time they were on. An obsessive childhood friend to an airhead victim - pretty annoying. Oh yeah, and the typical, boy leaves girl, girl sad but in love, he returns as a jerk.
I don’t want to spoil it, but honestly, it’s not a must watch. It’s one of those if you want your brain to have a break, and not wonder, what how and why, then this is good.