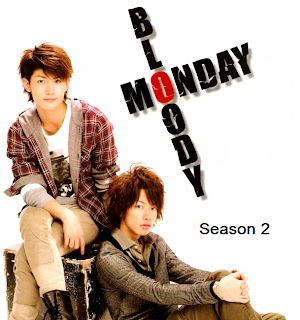 
While the first season was about terrorists wanting to spread a deadly virus this is 2 years later about terrorists trying to get this huge bomb which could destroy not only Japan but all the countries around as well. While tird-I and the terrorists try to get hold of the bomb Fujimaru goes through a lot himself. He got a new job at a job and has quit having anything to do with computers, or so he claims... Later on something happens at work and he is back to the hard life where he is resposible for so many peoples lives. He loses a lot of importent people in his life. But he has to continue no matter how hard it is for the sake of Japan. Along with his friend Otoya he tries to find a way to prevent the terrorists from carrying out their plan even though it is hard enough to know who they can trust. Many of people are suspected of betraying and people whom they thought they could trust are betraying them.


For me this was way over what I expected. I thought it wouldnt be able to be as good as I wanted it to but it was way better. Ofcourse im a fan of Miura's acting so. And the action is .. uff.. and there are so many things happening which you wouldnt even expect. I can not imagine it being any better than this. And having to wait a week for every single episode made it even worse! I was going crazy! And why did it have to end at ep 9?! Im definetely expecting a season 3! It just cannot end like this! LoL fangirl gone mad, haha. And with 3 veeery handsome boys in it,, gyaabooo. I was so impressed by Otoya (Sato Takeru) in the drama. He was soo cooooool. He was holding this lecture/presentation at his university and my jaw just dropped . Like he was talking a whole other language,, i mean he was (japanese) but ,, smart japanese. And J! Narimiya Hiroki, he dyeed his hair blond, or white. Ahh.. he was so cute,, and evil. But more cute than evil. hehehe.


You MUST watch this ! But first if you havent watched season 1 WATCH IT!! You gonna miss something amazing if you dont. + a few handsome boys :D

And if Bunji gives below,, let me tell ya something,, she is VERY picky. You gotta watch this.


Bunji's verdict
Well, first off, gotta say, the first season was fenomenal, so picking up from there is hard enough. Eventhough I liked the involvement of Haruka, the little sister, and his best friend Ooyata, I gotta say, it didnt quite reach my expectations. I did find the thought behind the story awsome, and the seriousness was waaay better in the second season, in the end there were several bad things about it. Acting-wise, it was awsome, but I found the storyline a bit dull. I mean, there were no real enemies. I mean, yeah some strange talking terrorists, and some weird hacker, that seems to be better than Falcon, but it wasnt quite there. J was there too, blond, making him more nuts-looking than usual, but his role was too boring this time around. Missed the insane feeling of terror, when he was around.
On the other note, the actors couldnt be better, and who doesnt love a cute hacker, adorable Nuclear physics student and a hot terrorist? Lols, but yeah, if you liked season one, and wondered what has happend to our beloved Falcon, you should watch it. Yes you are going to be on egde all the time, so be careful in watching it in one go, but dont expect it to be like season one.