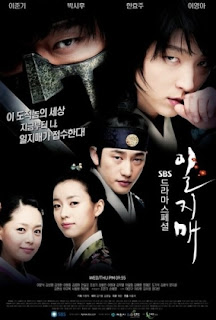 
Iljimae is a thief whose face is unknown: he steals from corrupt government officials and gives it to the poor. The people love and support him, but the King and his nobles hate him, and want to catch him.
Several years ago the nobleman Lee Won Ho was assassinated, with his son Geom watching it from inside a closet. The assassination was ordered by the king, after he was told a fortune: that in the nobleman Lee Won Ho’s house there is a person who is as bright as the sun, and will be adored by the people. Thinking it is Lee Won Ho, the king orders the assassination. After the incident, Geom is adopted by a retired thief, and when he meets his mother once again, he sees that she is an outcast and she encourages him to act like he doesn’t know her, so he doesn’t become an outcast like her. Because of these misfortunes, Geom loses his memories, and forgets his young days.
In our current time, Geom now Yong (Lee Jun Ki) is starting to get his memory back, and sets out to find his older sister, only to see her captured and hanged. By this he swears revenge, to find the people responsible for the murder of his father and sister. The only thing he remembers is the emblem on the killer's sword, which leads him to disguise himself as Iljimae and find justice for his destroyed family.

After 4 years I’ve finally finished the drama. Wow, it really has taken me this long! Not because it’s bad or anything, I just didn’t love it. Well, historical drama isn’t really my thing… Even though the love story is sweet I didn’t like or agree on the main couple. And that might have something to with me loving the supporting actress. Bong Sun. Seriously, she was my favorite in the entire drama that might also be the reason for me not really liking the ending. Sort of half assed, but on the other hand, the rest of the people’s lives are pretty cool… Hmm, my rating is based on the overall drama, even though I’m biased..

Jenji's verdict
Contrary to Bunji I really like historical dramas, and this one was definitely one of the good historical dramas. Even though yes of course as usual there is the guy and the girl who is his best friend and she loves him but he loves another one, typical yes, but still good. The ending though was a bit weird, but not THAT bad. I like the story and the people in it and I actually finished it in a few days, which means it keeps you interested (or me at least). Considering its from 2008 I really enjoyed it because I seriously cant watch "old dramas" even though its just 4 years. I dont think I have anything bad to say about the drama, it was a bit slow in the beginning, I mean they show a bit of the ending, and they you are like waiting for that to happen but it only does in the end, lol. But its a slow, relaxing drama. Nice historical.