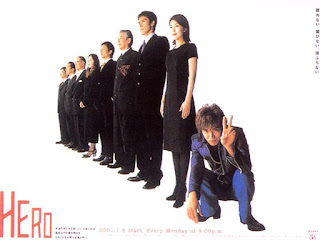 Once a high school dropout, Prosecutor Kuryu Kaohei (Kimura Takuya) is assigned the Josai Bureau in Tokyo. He is a different kind of prosecutor as he takes his time to evaluate every case until the very last minute, and doesn’t seem to differentiate in cases: be it a murder case or being it a theft case. In his eyes all cases are of equal importance. He is paired up with a paralegal, Amamiya Maiko (Mastu Takako), who is the complete opposite. She dreams of becoming a prosecutor, even volunteers to help Kuryu so that she’ll get better points from her boss. At first she finds him repulsive and lazy, but as time passes she notices how diligent and observing he is, and starts to admire him.
Together with the other prosecutors and paralegals they encounter different, often absurd, people, and deal with them as well as their own family and love lives.

Okay so this drama is one old drama, with an extremely young cast that I today know as the ‘oldies’ of jdorama. I’m not only talking about Kimura Takuya but every other cast member that I know as old actors - who were then pretty young, and with black hair. I never really wanted to watch it; one because Jenji said she was unable to finish even episode one. And two, well it’s from 2001.. That is 13 years ago!
BUT I have to admit, it is really a classic. Ones you get used to the way the camera shoots, you will sort of like it. It has the typical ‘awkward humor’ with the long silence and long stare, which at the beginning I kind of felt boring, but ones you get a hang of the ideal, you kind of can’t stop laughing. And yes it most defiantly is a classic.
I liked the storyline(s) and every character, and I completely understand the huge ratings! So! To watch and not to watch? I would recommend it for Takuya fans and for classic drama lovers. But if you can’t deal with old dramas, this probably shouldn’t be your choice.