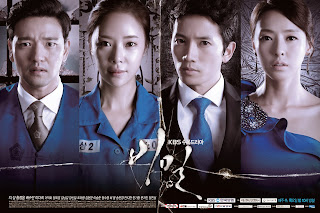 Kang Yoo Jung (Hwang Jung Eum) is the kind of girl who dedicates her everything to her boyfriend, Ahn Do Hoon (Bae Soo Bin). They have been together for several years and Yoo Jung is supporting him in becoming a prosecuter, something which isn't easy considering their circumstances, all while waiting for him to propose to her. Then one evening it happens. Do Hoon takes her out to the café they usually go when celebrating occasions. He finally proposes to her and Yoo Jung's world is all bliss. They head back home with the car, Yoo Jung is all smiles and is living the fairytale of her life. However there is an uneasy feeling over the night. A heavy rain starts to fall and they can barely see anything. Suddenly an accident happens. The car starts slipping and Do Hoon loses control and hits something. He goes out to check and Yoo Jung shortly follows, however he says there is nothing and they get back in the car. A few days later, cops arrive at Yoo Jung's place. She gets arrested for a hit and run. What even worse, the victim is dead and it was the girlfriend of a man she had accountered before, a young heir chaebol, Jo Min Hyuk (Ji Sung). This is the start of a story of revenge, where love is a test.

This drama is one of those you don't watch while it's airing. Because it drives you absolutely crazy. The first couple of episodes it isn't that bad and you just go with the flow. However then all the tragedy starts. If you aren't into heartpaining dramas then this really isn't for you. You just keep wondering, how many bad things can happen to one person. Of course we've had the story of a chaebol and a poor girl before, and yes typical korean, they do this a lot, but I liked this one. Not to mention Ji Sung. His acting is so crazy, all you see are his eyes and all the feeeels. When he is sad you are sad, when he hurts you hurt. He just conveys alll the feelings to you. Hwang Jung Eum as well did a great job again. Not much to say. I recommend this drama. Even though we've seen it before again it's in a new way, new actors bring new kinds of feelings. Definitely a great drama to watch if you feel for being all emotional :P I almost thing 16 episodes is abit short. They should have made it 20 episodes. But still alright ending and all, not gonna spoil anything :D

Bunji's verdict
Holy… Wow, this is one heck of a ride. I think I yelled most of the time while watching this since I was so shocked. I mean the twists and the turns makes you stare confused, and made me seriously think too much. I could not imagine the ending unless they all die, which usually happens in these dramas. The main leads were wow, no more said. I couldn’t take my eyes off so that says it all. And besides the two annoying clichés at the ending I have to admit it mostly is a great drama. In order not to spoil I am going to stop here and say watch it. No matter what kind of drama you like, watch it.