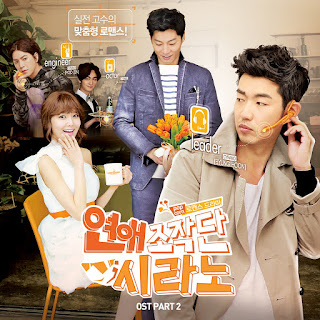 Believing in true love and ultimate romance Gong Min Young (Choi Soo Young) works at a dating agency that puts people in classes, then setting them up for blind dates. When one of her clients, a low class, asks Min Young for a favor: to set him up with a top class girl, Min Young isn’t sure due to the agency’s policy. The policy says that a top class can’t date a low class, but after being persuaded by the client she agrees. After setting them up in a restaurant, thing start smoothly until the top class confesses to a waiter out of the blue. Bummed by the failed love mission, she by accident sees a surveillance set-up inside a van, and meets the owner, but stumbles and passes out. She wakes up inside a closed theater, and meets the three men of Cyrano Dating Agency who helped the waiter getting the top class girl: Seo Byung Hoon (Lee Jong Hyuk) the owner and a former famous producer, Moo Jin (Hong Jong Hyun) a genius computer engineer, and Ah Rang (Jo Yoo Woo) a stage artist student. Confused, yet curious about their work, and when she is offered a job in the agency she can’t help but being interested.
Next to the theater, a restaurant owner named Cha Seung Pyo (Lee Chun Hee) with a mysterious personality and background seems to have an intense interest in the theater and Seo Byung Hoon, and for some reason starts to find an interests in Min Young…

I didn’t expect to like it this much, but it was very good and very interesting. It wasn’t as stuffy and draggy as I was expecting, which might be because there were many side love stories, which were also very romantic and heartfelt. I’m not a fan of either Soo Young or Lee Jong Hyuk, but I found them very cute and very good at acting. Also Jong Hyun, Chun Hee and Yoo Woo were great, but I have to admit that cameos were great, every single one of them. So I enjoyed it, a lot.
Recommendable!