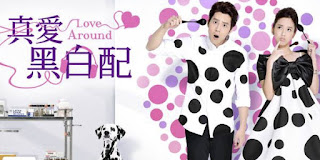 On his birthday Zhou Zhen (George Hu) is heartbroken when he is reminded of his girlfriend’s promise to celebrate his birthday with him. She broke up with him 2 weeks before the birthday, because she was fed up with his father and the gangster background of his. Ever since the break-up, Zhen started calling a radio station, asking for the same song to play. Hosting the show is Liang Xiao Shu (Annie Chen), who is known to be honest and straight forward in her opinions, and personally believes that justice will always be victorious. Feeling bad for him and wishing him the best, she repeatedly plays it every time he asks. As her boyfriend’s birthday is on the same day, she decides to buy him something related to the one thing he loves: baseball. At the baseball court she meets Zhen, unaware that he is who he is, and starts lecturing him about the fact that he paid three booths so no one else can play, except for him. When a competition is held where the winner gets a signed baseball bat, Xiao Shu wants to win so she can give it to her boyfriend, but is really bad at it, so she asks Zhen for the favor, basically pleading him, and eventually persuading him. He wins the bat, and gives it to her free of charge. The two end up meeting again after she by accident enters his cab, and she wants to pay him back, but he leaves not wanting her money. Running after him, she happens to see her boyfriend at the hotel where Zhen left, and follows him to find out that he is cheating on her.
After an ugly break up, and Zhen helping her, the two become buddies. But Xiao Shu hates gangsters, especially since her father is an ex-cop and she keeps putting Zhen’s father down on her show…

This drama was a very good break from all those dragged and long dramas, also made me fall for this couple. The storyline is very simple and honestly quite slow in its action. I mean for some people it might even be boring, but I have to say this, it really is an okay family drama, even with the lacking and somewhat obvious story. But for some reason I enjoyed it, and it might be because I really missed Taiwanese dramas, the entire too-serious-for-life kind of love stories and yes as said before, obvious.
To sum up, I would say it is good, and the couple is one the best in drama history.