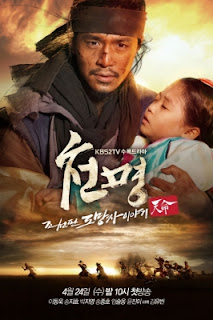 Title: The Fugitive of Joseon

When the ill king decides to abdicate from his position, the crown prince (Im Seul Ong) is left in a dilemma: if he takes the throne he’ll be seen as a bad son by not waiting for his actual time to reign, and if he denies he’ll be seen at a traitor for not accepting the king’s order. All his life the crown prince had been fighting every minister, and ill-fated people who were trying to kill him, leaving only a handful of people he can trust. One of the people he trusts is Choi Won (Lee Dong Wook), the grandson of the crown princes’ doctor who was executed after making a mistake. This has left Choi Won with resentment and disappointment in the crown prince, also not being able to forgive him for not helping him then. Working as a doctor in the royal clinic, Choi Won has been known to be a ‘quack’ for not wanting to do his job, as he is too busy taking care of his sick daughter at home.
When the king passes out, the royal clinic sends out their best acupuncturist, but the crown prince refuses him, asking for Choi Won, whom he knows is a talented doctor. But knowing the consequences if he makes a mistake, Choi Won declines, leaving a bad impression on everyone, especially Hong Dain (Song Ji Hyo) a royal nurse who is more talented than many of the male doctors in the palace. She became a nurse due to her being saved by a doctor she doesn’t remember well, but dreams of meeting.
After the crown princes’ royal doctor is murdered, evidence are starting to pile up against Choi Won, and for some reason he is not able to prove his innocence, in order to save his daughter he makes a the decision of becoming a fugitive…

Besides the fact of having an amazing cast, this drama is an incredible piece of work. I have to say I was sad that it finished, made me feel a bit empty at the end. The characters and the storyline grow on you, and you cannot take your eyes of the amazing screenplay. I know I’ve said this before, but I really am not a fan of historical dramas, because honestly I don’t understand any of it, especially everything about the king and his royal court. But I think I didn't mind this because it was very clear, also most of the story was outside the court (though the things happening inside I really didn’t understand, I didn’t really care). On the other hand, it really ends up being all political and confusing in the end, making the rating drop - they REALLY drag it out at the end.
All in all, a recommended drama.

Posted by Anonymous at Wednesday, November 13, 2013